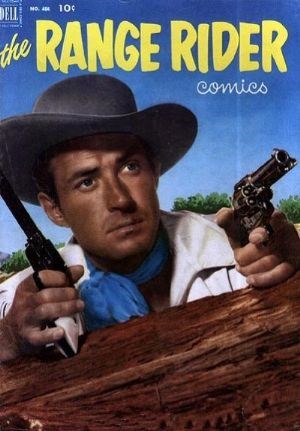 WESTERN TIE-INS
THE RANGE RIDER COMICS
Home, home on the range…And who could be more at home on the range than the Range Rider, with his thrilling adventures of the great outdoors, his exciting experiences rivaling those of Davey Crockett, Dan’l Boone, Buffalo Bill, and other pioneers of this wonderful country of ours? And, Dick West, all American boy! 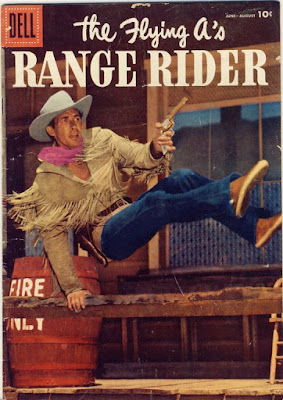 So began each blood churning episode of The Range Rider, a syndicated TV show produced by Gene Autry’s Flying-A productions, airing 1951-1953. There are 79 black and white 30-minute Range Rider adventures starring Jock Mahoney and Dick Jones, and I’ve seen two of them.

Dell Comics published 24 issues of The Flying A’s Range Rider from 1953 to 1959 and all of them had photo covers of TV star Jock Mahoney.

In an issue of Robin Snyder’s newsletter, The Comics (July 2009), long time comic book professional Bob Cavanaugh recalled his work with the Whitman Publishing Company, including his work on the Range Rider comic book series: 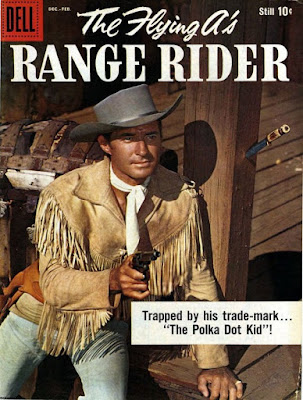 “Jock was the star of The Range Rider. We made the cover shots at Gene Autry’s western town in Newhall: trees, a railroad and typical western streets. Jock had spent many years as a Hollywood stunt man and was in top physical shape. Jock came up with a stunt where he would be coming down the street, leap up in the air onto a hitching rail and fly right at me as I faced him with a rifle in my hands. Whitman didn’t like to pay for an extra actor to be the bad guy in these photos, so I often glued on a phony mustache and played the part. 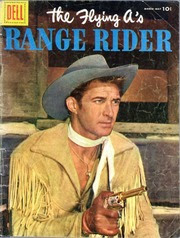 Earlier he had told me to hold tight when he grabbed the rifle and just relax. He grabbed the rifle, I held tight, and he rolled us easily to the street. The photographer was behind me and was to get the shot of Jock flying through the air at me. Unfortunately, he missed the shot. We didn’t do it again.

Jock was telling me that he was trying to get his wife to sell their house and move onto a big yacht in the harbor. She wasn’t going for it. Jock was step-father to Sally Field and was teaching her a lot of stunts. He was fun to work with.” 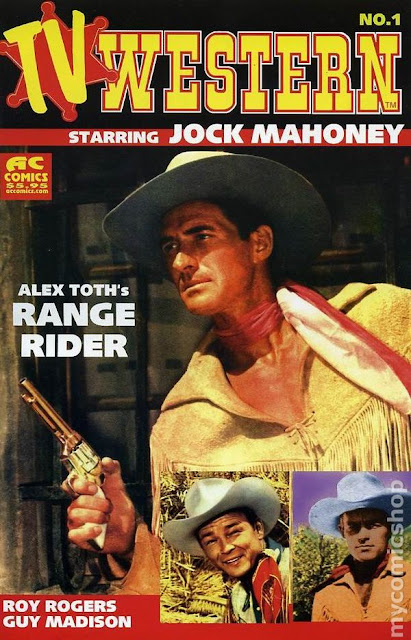