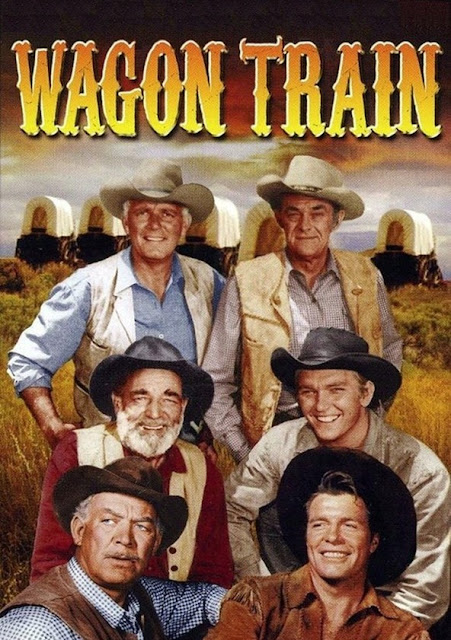 TV WESTERNS
WAGON TRAIN
While not necessarily forgotten, if you mentioned the TV show Wagon Train to a Millennial or Gen-Xer, you would most certainly receive a blank look in reply. Yet for eight years—first on NBC (1957-1962) and later on ABC (1963-1965)—Wagon Train led its Conestoga wagons on the post-Civil War trail from Missouri to California. Episode by episode the journey became one of the longest cross country road trips of all time. The ups and downs of life on the trail also echoed Wagon Train's travels up and down the Nielsen Ratings, including peaking at the top of the proverbial Rockies in the number one spot. 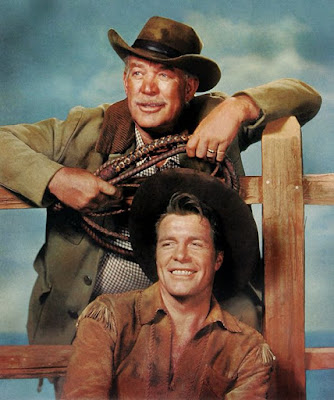 Wagon Train was directly inspired by the 1950s film Wagon Master directed by John Ford, who would notably direct an episode of the TV series in 1960. Wagon Master starred Ben Johnson and Harry Carrey, Jr., as well as Ward Bond, who would later take on Wagon Train's lead role. The show also borrowed liberally from John Wayne's 1930 film The Big Trail, in which Ward Bond also appeared. Ward Bond's long career would eventually lead to him appear in more films in the AFI 100 than any other actor.

On Wagon Train, Ward Bond was wagon master Major Seth Adams, and Robert Horton was the young and charismatic buckskin-clad scout, Flint McCullough. When Horton left the show after five seasons to pursue his singing career, Robert Fuller took over as scout Cooper Smith. Fuller would later be followed by Scott (Denny) Miller as scout Duke Shannon. When Bond died of a heart attack in the middle of the fourth season, he was replaced—without any explanation—by previous Wagon Train guest star (season three) John McIntire as wagon master Christopher Hale. 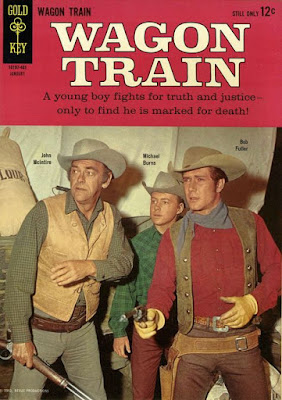 The Wagon Train formula was to build each episode around a prominent guest star. By putting the proverbial spotlight directly on the guest star’s character, Wagon Train was able to snag the biggest stars among the many TV Westerns.

The show was originally shot in black-and-white with location filming in Utah, Arizona, and California. When the show moved from NBC to upstart network ABC in 1962, five episodes of the show were expanded to 90 minutes and shot in color. When the ratings didn’t justify the extra cost, the length was trimmed back to 60 minutes and Wagon Train became the only show to revert back to black-and-white after being filmed in color.

Ward Bond and Robert Horton notoriously didn’t get along. Bond was jealous over Horton receiving more fan mail. He would try to limit Horton's screen time and interfere with any good lines Horton might be given in the show's scripts. This well publicized off-screen friction lent an element of realism to their scripted on screen disputes. Fortunately, the pair reconciled shortly before Ward’s unexpected death. 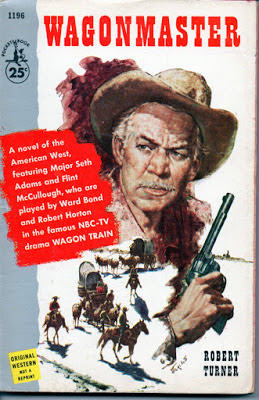 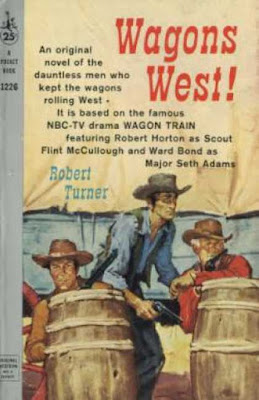 My interest in Wagon Train surfaced again recently after watching several episodes on the nostalgia cable channel, MeTV. This led me to track down and read the three Wagon Train paperback tie-in novels written by Robert Turner. Along with the tie-in novels, Wagon Train’s popularity generated a number of other tie-ins, including traditional items such as guns, lunch boxes, plastic action figures, a board game, and a long running series of Dell comic books. The show was also popular in England where it generated a series of traditional annuals—Christmas time publications tied to popular shows and other pop culture icons, which made easy gifts for nephews and nieces. 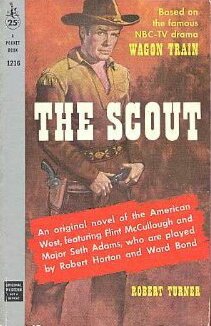