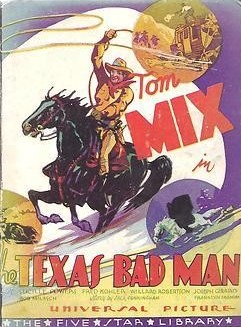 WESTERN TIE-INS
TEXAS BAD MAN
When I was young, media tie-in books were harder to find than they are now, and in those pre-Star Wars times, when people talked about the licensing industry, it had more to do with cars than movies or TV.

But in the early days of movies, the idea for media tie-ins did indeed exist. Engle Van Wiseman Incorporated offered some notable titles through an imprint called The Five Star Library, based on movies starring Tom Mix, Buck Jones and Tim McCoy, along with dusty old dependable like The Count of Monte Cristo and Great Expectations. 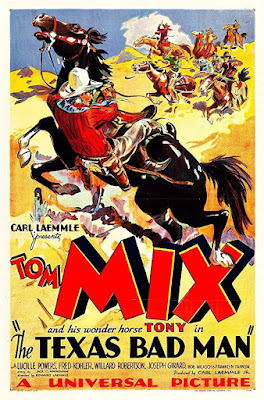 Recently, I took in the 1934 Tom Mix movie Texas Bad Man and was more than a little surprised when I found the Five Star tie-in title in a used book store. The palm sized hardback resembles a Big Little Book (or Little Big Book) and credit for the trusty adaptation is given to A.J. Sharick, from the Universal Picture by Jack Cunningham.

Both versions of Texas Bad Man tell an exciting, and somewhat offbeat story of Tom Mix, undercover. As deputy Texas Ranger Tom Logan, Mix must pretend to be Dan Bishop, a wanted man, infiltrating an organized band of outlaws. Seems the gang has been raiding the stagecoach line near San Luis. Operating under his Dan Bishop cover, Logan is sent by Knox to steal the gang’s thunder. 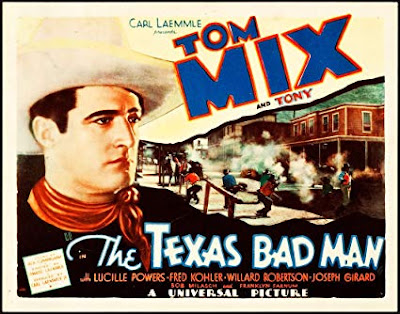 First, a run of handbills is made up declaring Bishop’s lawless status. After reviewing them with local Ranger Captain Carter, Logan/Bishop robs a stage in broad daylight, attracting the attention of the gang. The outlaws try to pick him off with their rifles, but trick rider that he is, Logan can’t be touched. After hiding the stolen payroll satchel, Logan allows himself to be captured by the gang’s chief henchman, an tough guy named Hampton. Logan/Bishop is taken to meet Keefe, the head owlhoot. Keefe recognizes Bishop from the wanted posters and allows him to join the gang on the condition he bring half the payroll money back in tribute. Hampton plans to discredit Logan/Bishop and get the dough for himself.

It’s a familiar plot, which plays out to a routine conclusion with some notable quirks. Keefe’s naively innocent sister shows up; Logan dons an additional disguise as Senor Casper Capistrano; and Hampton tries at the very end to double-cross Bishop yet again. In the end, Tom naturally gets the girl, Keefe and Hampton meet their maker, and Tony (Mix’s four-legged companion) puts in a rough and tumble few days. Hopefully, he had a stunt horse. 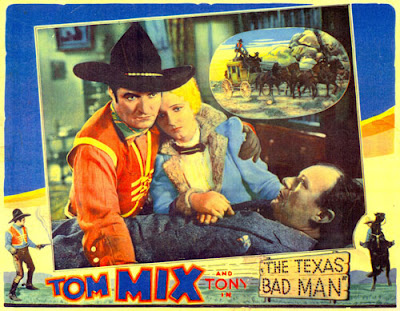 I’m sure I’ve seen each of these scenarios played out in subsequent episodes of Hopalong Cassidy or The Lone Ranger, yet Mix’s melodramatic delivery is hard to beat—however, handfuls of buttered popcorn are highly recommended to make it all go smoothly down. Both the book and movie were a lot of fun, and I can only imagine the joy of finding that Five Star edition, nearly eighty years ago, and taking the advice on the back cover—Read the Story, Then See the Picture!