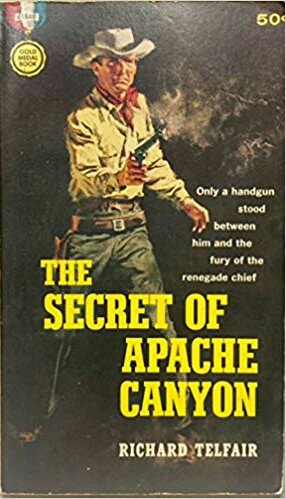 WESTERN PAPERBACKS
THE SECRET OF APACHE CANYON
RICHARD TELFAIR
Writing as both Richard Telfair and under his own name, Richard Jessup contributed a fair share of westerns to the Gold medal line in the ‘50s and ‘60s. Sometimes he delivered the goods and sometimes he didn't. However, he’s always great on a line-by-line basis, writing clear and descriptive prose. But, reading The Secret of Apache Canyon, I got the sense he was winging things more than usual.

Telfair pulls the reader in as an Easterner named Rogett meets with a scarred landowner to finalize an agreement over mineral rights. There’s a great air of tension and mystery, a sense there’s a strange backstory, including certain phrases that dare not be mentioned around the owner. There are also some marauding Apaches, a daughter whom no one is supposed to ask about, and a looming betrayal.

Telfair keeps everything steaming along for about half of the novel, delivering a score of exciting moments and vivid scenes of outdoor survival. Unfortunately, he never manages to deliver a convincing explanation for what’s actually going on, even when it comes out of the mouths of the characters. The final explanation, which is supposed to clear up all the mystery, still leaves questions unresolved and the reader, ultimately, unsatisfied and disappointed. If you turn off your brain it’s fairly exciting, but it’s hardly top shelf.