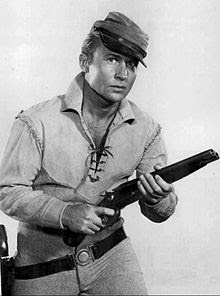 WESTERN TIE-INS
THE REBEL
THE JOURNALS OF JOHNNY YUMA
From 1959 to 1961, The Rebel—The Journals of Johnny Yuma ran for 76 episodes on ABC. An aspiring writer, young Confederate Army veteran Johnny Yuma (Nick Adams) is haunted by his memories of the American Civil War. In search of inner peace, Yuma roams the Texas Hill Country and the South Texas Plains fighting injustice where he finds it with a revolver and his dead father's sawed-off double-barreled shotgun. 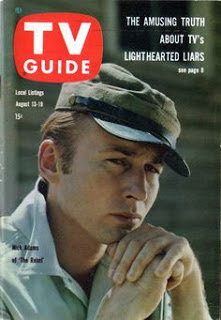 His father’s gun was a big draw for the show, as gimmick guns were popular with TV Western heroes at the time.  Johnny Yuma was a man proud of the remnants of his rebel uniform and was often forced to defend himself against slurs directed at him and the bitter defeat of the South. Using both his fists, a Civil War style Dragoon pistol in a cut-off Cavalry-flapped holster and what Yuma called his scattergun—a sawed off double barrel shotgun altered at both ends, which he usually wore strapped to his leg. 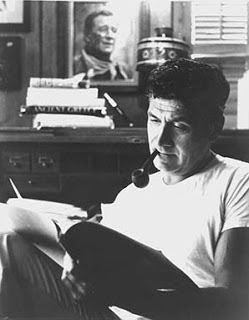 Writer-producer Andrew J. Fenady co-created The Rebel with the show’s star, actor-writer Nick Adams. The only regular actor on the series, Adams was involved from the inception in the show's design and the writing of episodes. Fenady appeared twice in the series. One of those appearances was as United States Army General Philip Sheridan in the episode Johnny Yuma at Appomattox, which would play an important part in the further life of the show and the character of Johnny Yuma. 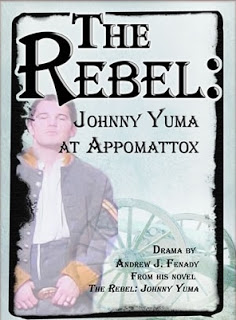 Aside from his producing and screenwriting credits, Fenady was an award winning novelist. He wrote many Westerns as well as hardboiled detective tales, one of which (The Man With Bogart’s Face) won an Edgar Allan Poe award from the Mystery Writers of America. Not one to miss an opportunity, in 1998, he revived Johnny Yuma in an original novel based on the TV show. Published in paperback by Berkley, the novel picks up at the end of the Civil War. As part of the Confederacy, Johnny Yuma lost the war, but the battle still rages inside him. As he makes his way home, Johnny continues his battle—only this time he's fighting for those who can't fight for themselves. But when the young soldier arrives home, he faces an old enemy—and deadly new battle. 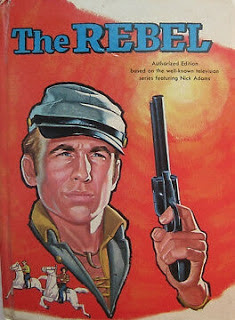 The in 2006, Fenady further kept the character alive by adapting the episode Johnny Yuma at Appomattox (in which Fenady had appeared as General Sheridan) into a one act play, which was performed at the Pasadena Playhouse.

It was also published in play form by Dramatic Publishing. In the play, Fenady places Johnny in the thick of the action at a pivotal point in history. The final battle has been fought and lost. General Robert E. Lee is about to surrender to General Ulysses S. Grant at Appomattox Court House on Palm Sunday, April 9, 1865. But Johnny Yuma has a plan. If he assassinates Grant, if a Southerner kills Grant, the South will go on fighting—and the North, without their great general, will lose. Yuma knows Grant will humiliate Lee during the surrender. From the attic, Yuma has a bead on Grant, and he takes dead aim. Fenady, used Lee's and Grant's actual words in the play's reenactment. 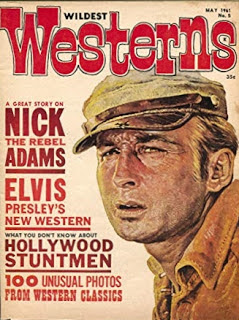 Chosen as one of the top 100 Western songs of all time The show’s theme, variously known as The Rebel or The Ballad of Johnny Yuma, was composed by Richard Markowitz, with lyrics by the show’s co-creator, Andrew J. Fenady. The song was recorded by Johnny Cash (after he beat out Elvis Presley for the rights), but it was not released as a single until shortly before the show went off the air. Nick Adams had previously recorded the theme, which had been released on Mercury Records, but it wasn’t a hit until the Johnny Cash version hit the radio waves. 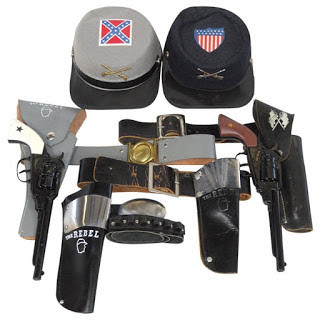 During the run of the show, Johnny Yuma was popular enough to generate related merchandising, such as an Ideal board game, an action figure, a Whitman tie-in novel for younger readers, and the inevitable toy gun set. Dell also produced four tie-in comics as they did with many shows.
By Sixgun Justice at January 09, 2020