WESTERN NOVELS—GO FOR YOUR GUN 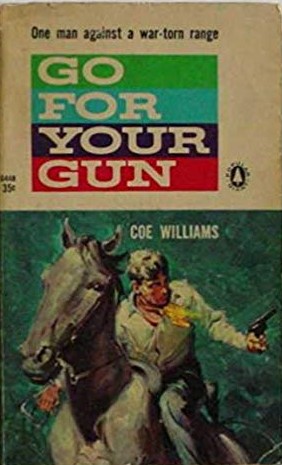 WESTERN NOVELS
GO FOR YOUR GUN
COE WILLIAMS
Cattle rancher Morgan Letham and Ann Kershner were an item until Ann’s father, Whit, was murdered, shot in the back and propped up in his saddle to drift lifelessly down the shoulder of Cache Mountain from the Mogul Plateau.

From Whit’s initial disappearance, Morg suspects sheep rancher Ward Grafton of foul play. Grafton, along with young Ellen McCloud (who bought out part of his original outfit) has long hoped for a chance at the grassy valley owned by the Lethams and Kershers. Like their sheriff, Clyde Rybolt, the people of nearby Longbow are more interested in politics than the law and, hoping to avoid a range war, they give Grafton the benefit of the doubt and openly ridicule Morg’s accusations. 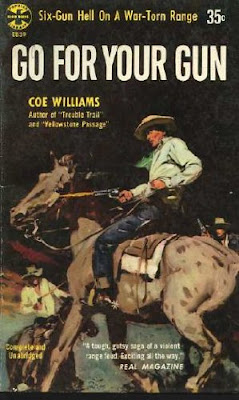 After a humiliating public showdown with Grafton, Ward takes a second, more serious beating from the man and his thugs. Adding insult to injury, the cow man is rescued and nursed back to health by Ellen McCloud. But as events unfold, Ellen proves more trustworthy than Ann, and when his girl deliberately lies to help Grafton, it’s to Ellen that Letham turns for help.

If I’d had the chance to read Go For Your Gun by Coe Williams in manuscript form, I would have enjoyed a suspenseful build up, carried along by Letham’s dawning realization that Grafton wasn’t working alone.

As it was, I couldn’t be surprised at the story’s eventual revelation because some blabber mouth hack in charge of the book’s back cover wrote “…grass-greedy Steve McKenna had already hired the toughest gun slicks in the valley to cut down his neighbors like butchered steers.”

Still, by the time Letham and his confidants fight through a roaring blizzard of ice and blistering hot lead to bring justice to the guilty, I was engrossed enough to finish the slim novel in a second sitting.

This spare paperback was released by Popular Library Eagle Books in 1955 and is a longer version of a story called Coroner’s Range, which originally appeared in Ranch Romance Magazine. I think it’s a forgotten gem in the western genre.

About Coe Williams, I know next to nothing. The cover credits him with Trouble Trail and Yellowstone Passage, but there’s nothing to indicate whether these are short stories or longer works. A web search offered little with only one additional credit, The Plundered Land, from the Fall, 1957 edition of Triple Western Magazine.