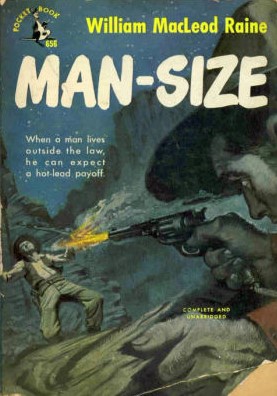 I always enjoy getting some real life history in a piece of historical fiction, especially in a pulp western. Fort Hamilton, near modern day Lethrbridge, Alberta, was one of the first whiskey forts in Canada built by Americans. Due to its reputation of dealing illicit liquor and low quality firearms, it became known as Fort Whoop-Up. This malevolent trade contributed greatly to the moral and physical demise of the area for homesteaders and Native Americans alike during the years of 1869—1874, and directly influenced the creation of the North West Mounted Police in 1873. 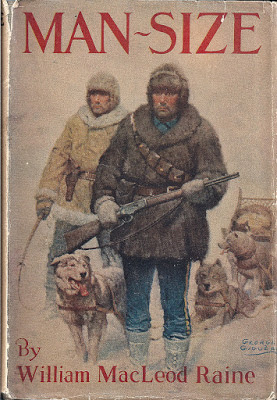 In Man-Size, it’s 1875 and the folks living and working around Fort Whoop-Up are harassed by Bully West, an unscrupulous wolfer. West is an underhanded brute who supplies cheap whiskey to the Cree and Blackfoot Indians and lusts after honest trader Angus McCrae’s daughter—Jessie McCrae, aka: Sleeping Dawn, a beautiful young woman of reputedly mixed heritage.

Another thing I enjoy is seeing a book’s title show up in the text somewhere, and if it’s used to underscore the dramatic action of a specific scene, so much the better. In Man-Size, it happens early on and helps ratchet up the tension. A whiskey runner named Harvey Gosse tells West about the emerging Northwest Mounted Police making West snorts scornfully— 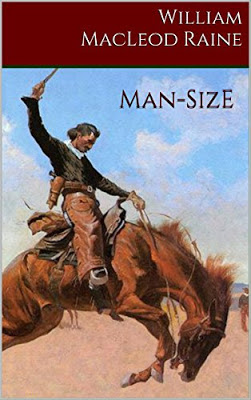 Gosee slowly dragged a brown hand across an unshaven chin. “I reckon you wouldn’t call ‘em tenderfeet if you met up with ‘em, Bully. There’s something about these guys—I dunno what it is exactly—but there’s sure something that tells a fellow not to prod ‘em overly much.”

“Quick on the shoot?” the big trader wanted to know.

“No, it ain’t that. They don’t hardly ever draw a gun. They jest walk in kinda quiet ‘an easy, an’ tell you it’ll be thisaway. And tha’s the way it is every crack outa the box.”

“Hmp!” West exuded boastful incredulity. “I reckon they haven’t bumped into anyone man-size yet.”

Of course you know West will have a run in with the redcoats and before long, heroic Win Beresford, a young officer in the force, makes the scene. Along with good guy Tom Morse of Montana Territory and a strong cast of supporters, Beresford will be forced to literally go the distance to get his man. 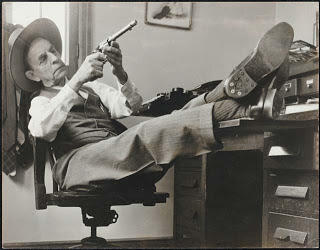 William MacLeod Raine (1871-1954) was an American of British descent who wrote westerns from the early 1900s until the 1950s. He wrote for the movies in the teens and ’20s, and I could easily imagine the music swelling in the background as the melodrama in Man-Size plays out. There’s Man-Size heroes (Beresford, Morse, and the Scottish trader, Angus McCrae), Man-Size villains (West and the gambler Whaley), pulp style titillation (Jessie is whipped by her father while Tom Morse looks on), and blood stirring action throughout. There’s also Raine’s formal, yet folksy footnotes on Native culture and regional peculiarities. In one aside, he describes the culinary aspects of rabbit, the poorest meat in the North…lean and stringy, furnishes very little nourishment and not much fat, and is not a muscle-builder.

One downside to the book was a dull subplot about Jessie/Sleeping Dawn’s bloodline, which would be judged racist by today’s standards and, frankly, it’s completely unnecessary to an otherwise page turning narrative. Man-Size was originally published in 1922, and the unabridged version I read came from Pocket Books in 1950. Hollywood rediscovered Raine posthumously for a couple turns: Three Young Texans (story) in 1954, and The Man from Bitter Ridge (novel) in 1955.