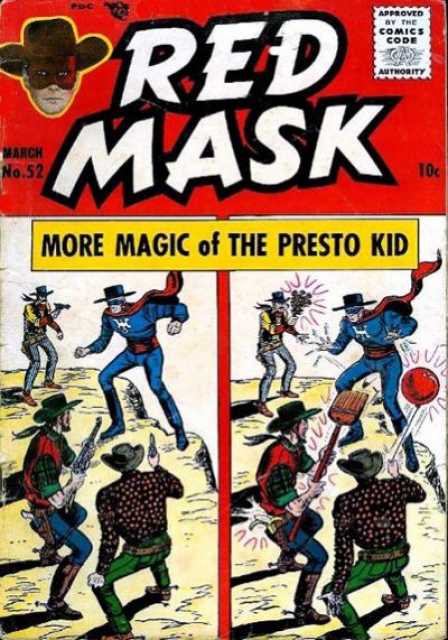 WESTERN COMICS
THE PRESTO KID
The masked western vigilante was a popular sub-genre in western comics of the ‘40s and ‘50s, and nobody had more of them than Magazine Enterprises (ME), a dynamic little publisher who gave us The Calico Kid, The Lemonade Kid, and the Black Phantom—a rare female western star. 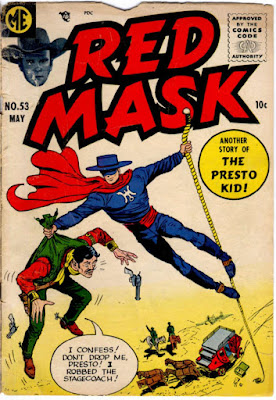 ME brought The Durango Kid to comics, and when they licensed RKO’s resident cowboy movie-star, Tim Holt, writer Ray Krank and artist Frank Bolle covered his face with a crimson kerchief and called him Redmask. Most famously, ME published Ray Krank and Dick Ayers’ The Ghost Rider, stories later reprinted and popularized by Marvel in the ‘70s—renamed The Night Rider so as not to interfere with their flaming skull-motorcycle character.

The 1950s was a Golden Age for western comics, but it was also an era when the Comics Code Authority clamped down on portrayals of violence. Gunplay in ME’s cowboy books was relegated to little more than examples of marksmanship, most often through the dubious practice of skimming bullets off gloved hands in order to disarm a bandit. 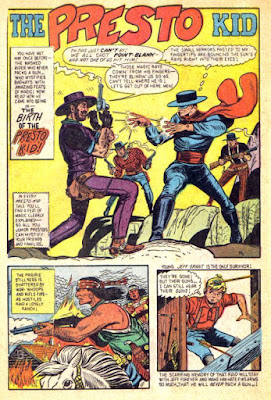 Enter a different solution in Red Mask #51, Sept. 1955—The Presto Kid didn’t carry a gun at all, but used illusory tricks and prestidigitation to confound the bad guys. The trappings of the masked hero remained, but stage magic replaced the six-shooter. Presto inherited the Ghost Rider’s creative team, writer Gardner Fox and artist Dick Ayers.

Jeff Grant is a peace-loving blacksmith in the town of Red Gulch. His reluctance to carry a gun puts him at odds with the residents, but especially with love-interest Molly Blane, the post-mistress. Such seeming cowardice ensures nobody suspects Grant of being the heroic Presto Kid. 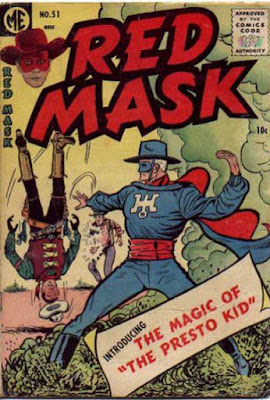 Some of Grant’s tricks were flamboyant, like when he hypnotized the outlaw Marlow and Indian chief Black Thunder into seeing a circle of flame, others were simply clever traps set up before the fact. As you might expect, Presto had a few goofy gadgets—can you say spring-loaded projectile balls hidden in a shirt sleeve? I knew you could—and the villains were always dumb as a bag of rocks.

Presto watched over Red Gulch for four memorable stories, closing out the Redmask series with #54 in September 1957. Not as wildly imaginative as it might’ve been, The Presto Kid was competently rendered, always enjoyable, and a top candidate for a contemporary reboot.