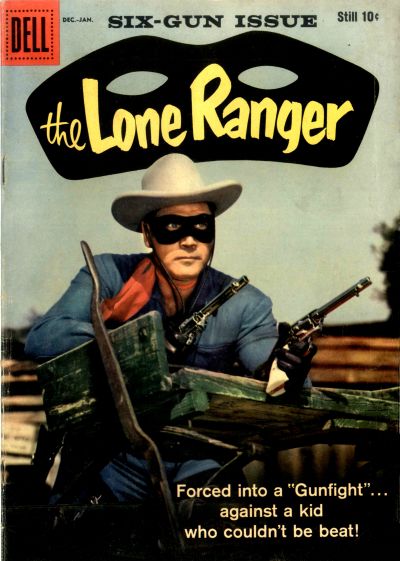 WESTERN COMICS
THE LONE RANGER
NO. 125
By the time The Lone Ranger No. 125 (Dec. 1958—Jan. 1959) rolled off the press, Dell had been printing comics starring the masked hero since the ‘40s, and Clayton Moore’s TV show was history—though his place on the comic book cover would last until the final Dell issue in 1962. 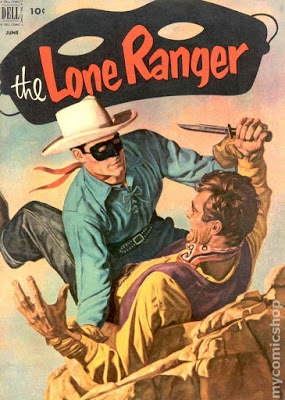 After more than a decade of stories, some reprinted from the comic strip, one can imagine the books’ creators looking around for something new. They found it in the post-Comics Code culture of educational comics. Having ever been on the good side of the Code anyway with a series of promises to parents (remember, Dell Comics are Good Comics), it was a natural fit. More than a few stories were built around a central topic, and action gave way, more or less, to the main players’ pedantic dialog.

With No. 125 we have the Six Gun Issue, an interesting look at a variety of firearms via some loose story frames. While Tom Gill turned in solid art, writer Paul S. Newman doesn’t get his usual credit for these tales, and I’m not surprised. The stories read as if produced by the editors of the Encyclopedia Britannica, and one can only speculate on anyone’s individual contribution.

The first entry, The Gunfight, is about a gun salesman training a young tough to use a double action revolver in order to get revenge on the Ranger. The reader gets an education too as several panels are dedicated to explanations of the mechanism. 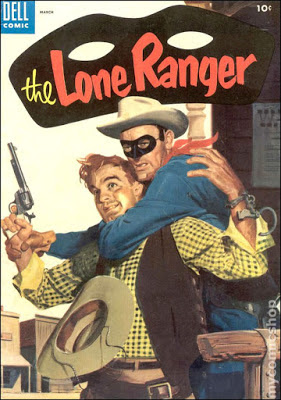 In the second story, Twelve Quick Shots, readers learn that the Spencer eight-shot repeating rifle is a big improvement over the old single shot muzzle-loading Springfield. When a band of Cheyenne warriors get their mitts on a bunch of Spencers, soldiers at a nearby fort aren’t too concerned, until the Indians suddenly have more ammunition than they ought to. The Lone Ranger discovers that the crafty natives are reloading the cartridges –and you can find out how to do it too, just be reading the story!

In the third tale, The Unwanted Gun, we find out that the little Derringer is as deadly as anything, especially when worn in a wrist holster—a concealed rig for the right forearm that proves to be the downfall of a card playing killer when the Lone Ranger sees him use a left-handed deal. 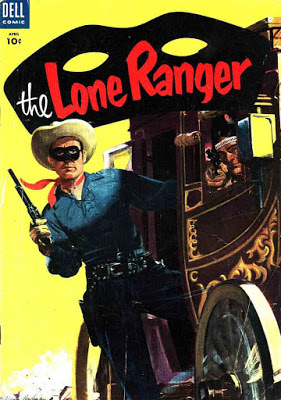 No Six Gun Issue could be complete without giving your newly enlightened audience a chance to join in on the fun. With full color ads for Mattel cap guns on the inside front cover, and a back cover devoted to the Daisy Air Rifle, Dell Comics knew where its bread was buttered.Dell’s Lone Ranger comics are rarely pulp masterpieces, but there’s always something fun to discover in these hunks of comic book history.

Best good-guy line by the Lone Ranger—I respect all people, Mr. Dallas, for all races and creeds helped make our west grow!

Best Anachronistic Line From The Daisy Air Rifle Ad—Fun to pack in a suitcase for travel by auto, bus, train, or plane! 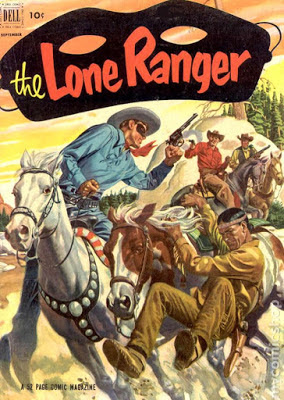 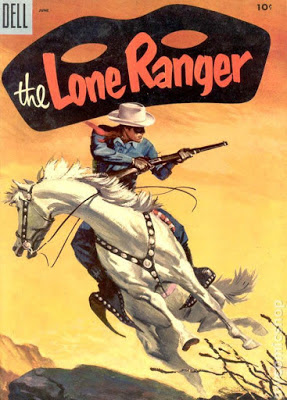