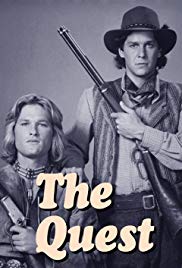 TV WESTERNS
THE QUEST
Starring Kurt Russell and Tim Matheson, The Quest was a late entry into the pantheon of TV Westerns, airing on NBC from September to December 1976. The pilot episode was originally broadcast as a television movie on May 13, 1976. 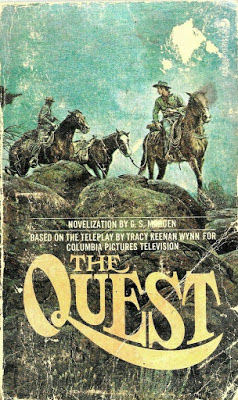 In a tepid TV riff on The Searchers, estranged brothers Morgan (Russell) and Quentin Beaudine (Matheson) are thrown together in a quest to trackdown and rescue their sister, Patricia, who has been kidnapped by the Cheyenne. As a youngster, Morgan, who is also known as Two Persons, had also been a captive of the Cheyenne for eight years until freed by the United States Army. Skilled in tracking and surviving in adverse conditions and rugged landscapes, his character is a stark contrast to his tenderfoot brother, Quentin, a young physician from San Francisco hardly ready for the brutality of the Great Plains and the Rocky Mountains. 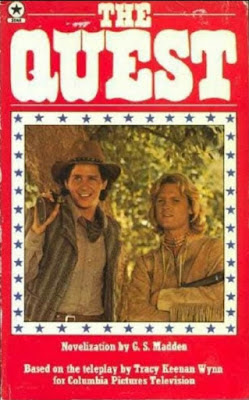 Shot mostly on location in Arizona, The Quest took on Don Quixote proportions airing at 10pm Wednesdays opposite Charlie's Angels. The Quest also premiered at a time when audiences had become jaded and disinterested in Westerns, pitting the series against something far more dangerous than the Cheyenne—low ratings. The show was canceled during its first season, leaving four of its fifteen episodes unaired in the US.

Despite its lack of popularity, a two-part episode of the show, Hatcher's Drive, won a Spur Award from the Western Writers of America for script writers Katharyn Powers and Michael Michaelian. In the episode, the two Beaudine brothers refuse rancher Hatcher's offer to go on his cattle drive but change their minds when he is shot. So they head out with six other riders, a cook and a recuperating owner heading 1500 cows towards Colorado 1000 miles away. Along the way they will face accidents, Indians, two of the riders aiming to rustle some of Hatcher's cattle and flee, squatters demanding money, a stampede, and a lack of water.

A novelization, written by G. S. Madden, of the show's TV movie pilot was published by Ace books in the US sporting a generic cover with no direct tie to the show. A Star edition published in Britain had a more traditional tie-in cover utilizing a publicity still from the show.

Email ThisBlogThis!Share to TwitterShare to FacebookShare to Pinterest
Labels: THE QUEST, TV WESTERNS