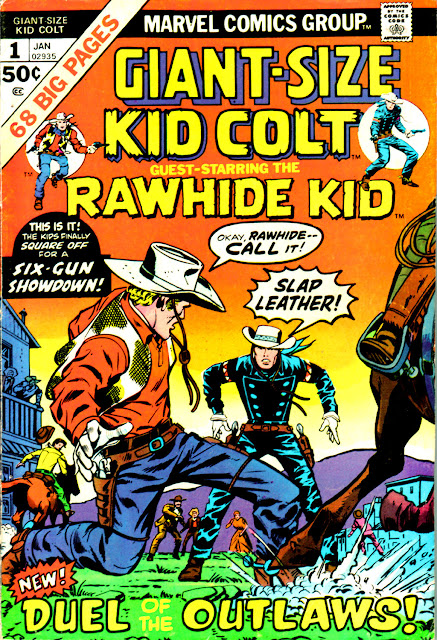 So, I was lying in bed at 12:30 on a Tuesday, too sick to read All About Dinosaurs for school, but not too sick to pick through the patchwork quilt of comic books covering my blankets. When my dad came home from lunch and tossed a flat paper sack my way, I felt measurably improved. Not well enough to read the library book yet, but hearty enough to consume the four-color delights he’d picked up from the corner drug store.

There were three comics in the sack, amounting in those days to a dollar’s worth of reading material, and each was a title my dad would naturally pick. There wasn’t a super hero anywhere to be seen. Instead, I got a copy of DC’s The Witching Hour (a scary comic that wasn’t ever scary), an entry in Sgt. Rock’s Our Army at War (hit and miss with me) and Marvel Comics’ Giant Size Kid Colt No. 1—a Western comic with characters I’d seen but never read. 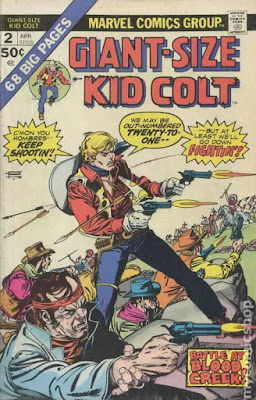 Wait! Was that a Jack Kirby cover?  I grabbed the cowboy book first. Even if it wasn’t a super-hero title, Marvel was my favorite publisher and its writers and artists were the creators I first learned to recognize. Leaping into the story, I didn’t bother to look at the credits, and by the time I finished the book’s first story, I was ready for more.
Kid Colt’s regular title would prove to be the longest running western comic book, beginning in 1948, and running 225 issues—however, for many years it offered only reprints from the ‘50s.

Solid art by series regular Jack Keller and familiar guests like John Severin was hampered by boring stories full of clichés and genre furniture. Like the bland horror DC was peddling, Marvel’s western reprints were enjoyable in small doses, but not as a regular diet.
But here, in 1974, was a brand new story that promised something better! 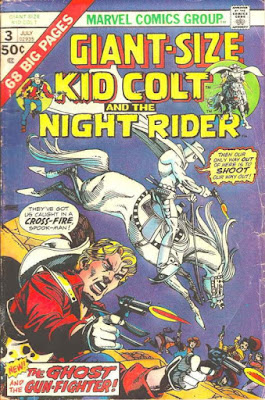 Wanted as a fugitive after killing his father’s killer in a fair fight, Kid Colt eventually acquires the outlaw brand and roams the West doing good deeds while one step ahead of the law. On his way into the town of Kurtesy, the Kid involves himself in a fracas between an entire saloon and one hombre who must be a real ripsnorter! As it turns out, the lone hombre is none other than The Rawhide Kid, another Marvel outlaw good-guy.

Thanks to the happily waning influence of the Comics Code Authority, Rawhide is able to shoot Scar Colby’s brother dead in self-defense. The outlaw who once was only allowed to shoot guns from the hands of his enemies, now high-tails it across the range with Kid Colt beside him. But bounty hunter Sam Murdock and his grandson Billy have moved into the territory.

Upset at being let go from a big city police department, Murdock’s got something to prove. He successfully gains the confidence of Rawhide and the Kid only to sour their friendship. Naturally this leads—in classic Marvel style—to the two heroes fighting each other over the misunderstanding. When Scar Colby butts in, Murdock’s plan spirals out of control. Before long, he and Jimmy are saving the two men they originally sought to capture. Meet the Manhunter is a fast-paced story, which I thoroughly enjoyed.

And I was wrong about the cover. Like the story’s interior art and script, it was the work of Larry Leiber, semi-regular Marvel creator, younger brother of Editor/Publisher Stan Lee, and soon to be Editor in Chief of the short lived Atlas Seaboard line of comics.Leiber and inker Vince Colleta’s art does owe a lot to Kirby—both for his run on the title with Dick Ayers and for his superior Boys Ranch strips—and the writing is fine, certainly entertaining me those many years ago.

Looking at it now, however, it’s the fingerprints of editor Roy Thomas I see most clearly. Thomas’ interest in character crossovers was evident in most of the Giant Size Marvel books and Kid Colt is no exception. Of the three Kid Colt issues, the star only got solo billing in the second, sharing the space with the silver age comic character Ghost Rider—now renamed Night Rider—in No. 3.

But the 70s were hard on Westerns.  Giant Size Kid Colt hung on for only three issues, with his regular title finally rode into the sunset in 1979. Despite a few comebacks attempts, Marvel has yet to fulfill the potential I hoped for with that Kid Colt story, but like the West itself, genre characters have a strange way of enduring. Kid Colt beat the odds for decades. Who’s to say it won’t happen again?