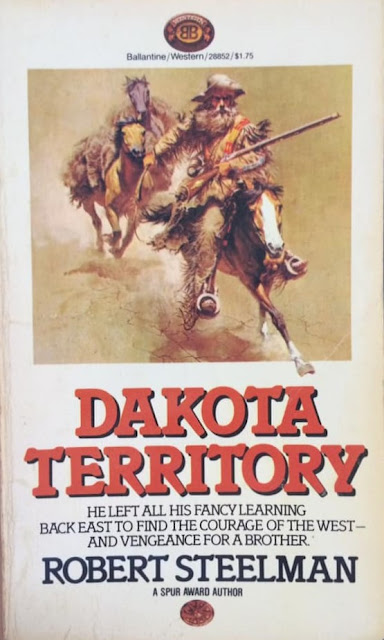 WESTERN NOVELS
DAKOTA TERRITORY
ROBERT STEELMAN
Recent Harvard graduate David Crego comes to Deadwood in the Dakota Territory to visit his brother. He is enthralled by the wild town and its denizens. He finds it all very different and exciting, but the murder of his brother and subsequent charges of cowardice against him quickly change his perspective. He steels himself to find his brother’s killer, outfits himself, and sets out boldly in pursuit—only to be immediately captured by Indians. Our hero needs a little help, and a little mentoring, which he gets from a rough old Mountain Man.

There’s a lot to like in this western. Author Robert Steelman’s descriptions of the towns and landscapes are fantastic, the story is engaging, and the secondary characters more than hold their own. Crego is a great protagonist, he undergoes a big transformation while struggling to stay true to himself.

Despite the charges of cowardice leveled against him in the beginning of the story, Crego no scaredy-cat—he was simply out of his element and over his head. As he changes from pink cheeked, wide-eyed innocent, to a tough as nails frontiersman, you’ll be pulling for him all the way.

Dakota Territory was published in 1974, and is one of my longtime favorite Westerns. I reread whenever the mood strikes me, and highly recommend it to all fans of the Western genre, especially those who enjoy a great mountain man tale.