WESTERN COMICS ROUNDUP
Founded by Sol Brodsky and Isreal Wadlman, Skywald Publications may be best remembered for their low-budget, brilliantly trashy, black and white horror magazines. In 1971, they branched out by issuing a number of four-color comic titles. While none of the titles lasted more than three issues, there were several intriguing Western specific titles deserving of longer runs.

The Bravados, Blazing Six-Guns, Wild Western Action, The Sundance Kid, Butch Cassidy...all the these titles were a mix of new material and reprints, including two issues of The Sundance Kid, which contained Jack Kirby Western tales published in Bullseye.

Attempting to capitalize on the popularity of the movies like Butch Cassidy and the Sundance Kid, The Professionals, The Magnificent Seven, and the rising regard for the Spaghetti Westerns, the new stories were written by Len Wein or Gary Friedrich, and the artwork was provided by Syd Shores, Tom Sutton, and Dick Ayers—all moonlighting from their regular comic gigs. The equal to almost all the other Western comics being published, the covers and, indeed, the stories in all of Skywald’s Western comics make them eminently collectible. THE BRAVADOS
The Bravados was the featured story in the three issues of Wild Western Action before getting a one-shot of their own, and then riding off into the comic book sunset. A gang of disparate misfits, The Bravados were bound by a thirst for vengeance, but fought together for justice—which would have made a great tag line. It didn’t matter the characters were little more than Western clichés, they were exactly right to ramrod this type of storyline—Reno was the tortured leader; Gideon the angry black cowboy; with a name to give today’s PC police conniptions, Injun Charade was naturally a mute; Drum, the hell-on-wheels good ol' boy had to be included; and the tough, but sexy Hellion was there to keep us reading. With the way they constantly bickered and sniped at each other, The Bravados were a Wild West version of any number of super-teams.

THE SUNDANCE KID
Not at all like the character from the movies, Skywald’s version of The Sundance Kid headlined the two issues of Blazing Six-Guns before getting a three issue run of his own. The Sundance Kid owed enough of his characterization to Kid Colt and Rawhide Kid to be considered kin. 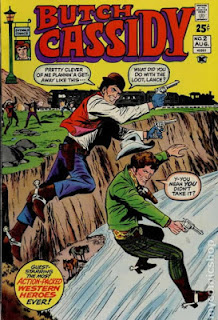 BUTCH CASSIDY
Skywald apparently felt Butch Cassidy was tough enough to handle a series of his own without a need to be given a test run in either Blazing Six-Guns or Wild Western Action, Skywald’s Western anthology comics. While Butch and Sundance never headlined together (they were both given new sidekicks/partners in their separate series), The Sundance Kid did put in an appearance in the third (and final) issue of Butch Cassidy.

BLAZING SIX-GUNS
Supporting The Sundance Kid in the Blazing Six-Guns comic anthology were Doc Holiday, Geronimo, Wyatt Earp, and The Red Mask (otherwise known as The Crimson Cavalier, and who should have had a series of his own).