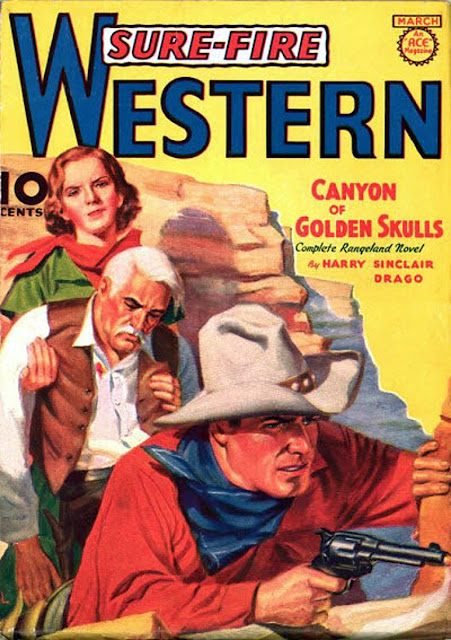 WESTERN NOVELS
THE CANYON OF GOLDEN SKULLS
BLISS LOMAX
Harry Sinclair Drago (1888-1979) was a prolific and award-winning author known for books like Oh Suzanna and Out of the Silent North. In the ‘20s, many of his stories were adapted into one or two-reel western adventure movies, and he penned many entries for the pulps under the name Bliss Lomax. With these few facts in mind, you might think Canyon of Golden Skulls, a 1937 novel with the Lomax byline, would be a real page turner. 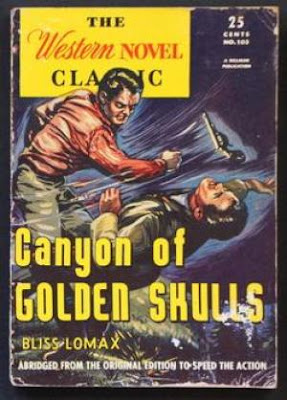 I’m most familiar with Hillman Publications for two comic book characters the company produced during the Golden Age—the period roughly defined as 1938-1951—Airboy, a character who found brief life in the 1980s at Eclipse Comics, and The Heap. But just as importantly, they produced a fairly extensive line of romance magazines, crime magazines, and abridged paperback novels. The 25 cent Hillman digests sported colorful glossy covers and each entry was Abridged from the Original Edition to Speed the Action.  Westerns came under several banners. There were Fighting Western Novels, Gunfire Western Novels, or The Western Novel Classic, which is where Canyon of the Golden Skulls landed. Now modified for speed, you’d think the pages would really zip along.

At first pass, Canyon appears to have a lot going for it. It’s got a great title. It’s got a rugged New Mexico setting in the town of Laguna and surrounding hard country, a gold rich range called the Anvil. Lance Runyan is the dashing young hero, whose unsavory, whip smart Uncle Thane occasionally rides with the outlaw Bull Lamar. Runyan’s dad, old Chalk Runyan, a wealthy widower seems steady and reliable, operating his ranch with only one hired man, a monstrous hulk named Corky Tarbo.

Things start with a jump as Lamar proves his malevolence, attacking Lance when he tries to bring a herd of cattle off the range. The young cattleman is saved only because Thane turns his back on Lamar and comes to his aid. Proving his worth to the family doesn’t mean Thane has a heart of gold. Only days later, he robs the Laguna bank and is pursued into the hills by Sheriff Lee Burnett—a dedicated lawman who wounds Thane in fair gunplay. Thane crawls off to die in the Owl Hole, a cave filled with underground passages known only to the Runyans. As he breathes his last wrapped in his brother Chalk’s arms, Thane names his killer, but not the reason for the shooting. Brimming over with gravitas, Chalk and Corky Tarbo vow revenge, not just on Burnett, but all lawmen—now and forever. 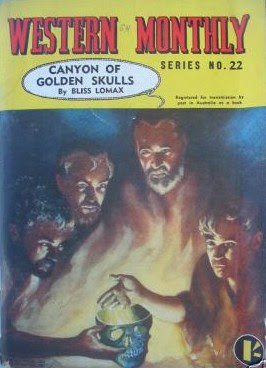 Things continue to heat up as the rancher employs his man to abduct Burnett and chain him without food or water in the deepest heart of the Owl Hole. Snapping Runyan’s obviously fragile hold on reality so early on was an interesting surprise from Lomax, and I almost imagined I was reading the roots of today’s serial-killer grocery store thrillers. Indeed, Chalk Runyan appears to have become a serial-killer as he and Corky methodically dispose of the next sheriff, Sam Pardee, and the next, Pete Harkins, in similar fashion.

But what about Lance Runyan? What’s the nominal hero of the story been up to while his dad kidnaps grown men from their bed, lugging them miles into the desert, and chaining them to granite cliffs? Why, he’s been out wooin’ Donna Stillings, the purtiest girl in town, and daughter of gold hunter Apache Dan Stillings, a well-known, but unlucky sourdough.

When Stillings opts to forego his dig for the respectable job of sheriff, Chalk Runyan faces his first quandary. He likes Stillings well enough and knows his son is in love with Donna. But his psychotic hatred of lawmen wins out and, after salting a local mine shaft with second hand gold dust, Chalk lures Stillings away. Now only Lance has the fortitude to wear the star and, by picking it up, risk the same fate as his predecessors—a slow underground death.

Turns out the four lawmen are alive and well. Chalk’s been visiting them every day, bringing them food, water, and a healthy dose of gloating abasement. Instead of an edgy psycho, Lomax now offers us a garden variety nut who’s pretty dull. With this revelation in chapter eleven, The Canyon of Golden Skulls turns into a plodding literary exercise no amount of cutting could accelerate.

Realizing he’s undercut his villain, Lomax proceeds like the creators of a ‘90s Batman movie—why have one compelling villain if two or three boring stereotypes will do? It’s here Lomax brings brash and bushy Bull Lamar back onto the scene accompanied by the sneaky no goodnick Little Dick (no, really). 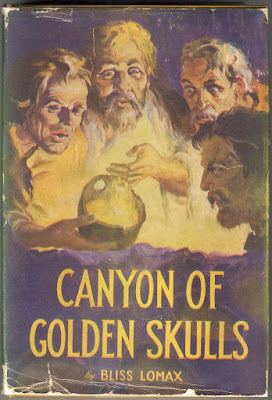 Lance, of course, is turning out to be less than a cracker-jack sheriff. Rather than hunt for the vanished lawmen (he’s convinced Bull Lamar is to blame) or wonder what’s become of his Uncle Thane (whose body Chalk secretly disposed of), he spends his time whining to his dad or his girlfriend. Meanwhile, the four sheriffs have managed to break their shackles. They can’t find a way out of the cavern, but they do find the tale’s titular McGuffins:

Coming at length to an irregular wall that seemed to bar their passage effectively, they essayed to climb over. They found no clearance, but high up there was a kind of shelf on which lay many round, movable objects in the thick dust. Stillings tumbled over several, and drew back with an exclamation.

“Heft one of these things, Burnett!” he burst out.

“What are they?” Burnett queried wonderingly.

Dan said nothing. He was fumbling for a bit of candle so prudently saved. It was minutes before he had it lit. Then it flared up to reveal a sight such as neither had ever dreamed of.

The round objects on the ledge shelf were skulls—Indian skulls, by the look of them—several dozen laid out in ceremonial rows, as though placed there unnumbered years ago by some forgotten Indian tribe. And the skulls were filled with fine gold!

Rather than follow up with this compelling find, Lomax simply uses it to alert readers that gold is present in the Owl Hole. Within minutes Dan Stillings locates the primary vein, and before too many pages have passed, he’s blabbed the fact to a visiting Chalk Runyan, who immediately catches gold fever and sets the four prisoners to work digging out the fortune. Hiding out in a separate section of the Owl Hole, Lamar and Little Dick hear the noise and intrude on the scene. Runyan eventually makes a deal with Lamar and the lawmen go on excavating the precious metal. When Lance finally gets around to trailing Lamar to the caverns, he peers over a ledge and bears witness to it all.

Eventually Lance is captured by his dad, and it’s Donna and deputy Blaze Masters who find the note he leaves, informing them of the entire plot. Then, almost as if the Hillman Publication editors themselves had grown weary of the plodding plot, the story wraps up in one hastily transcribed page—Lamar kills Chalk, Corky kills Lamar and Little Dick, somebody shoots Corky (it’s not clear who) and Lance gets the girl.

Like so many adventure stories of the day, The Canyon of Golden Skulls presents us with some unrealized potentials. The psychotic old ranch owner, the son who must become a hero, the enigma of the golden skulls, all are rough cut gems that could’ve been polished into a real treasure. For lack of time, or maybe inspiration, they remain as Bliss Lomax left them, lackluster harbingers of better things to come.