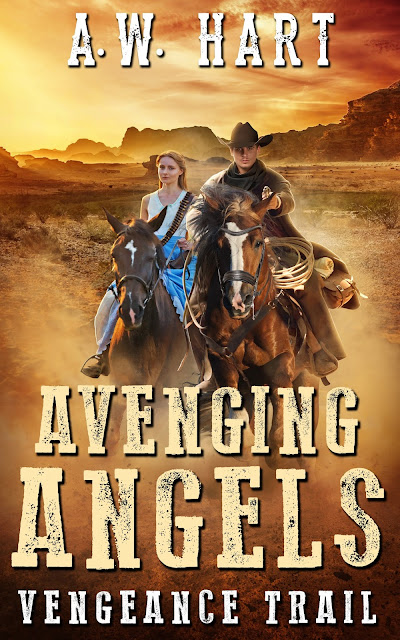 AVENGING ANGELS #1
VENGEANCE TRAIL
Peter Brandvold writing as A.W. Hart
Saddle Up For A Heart-Pounding, Bullet-Burning, Bible-Thumping Western Series Like None You’ve Ever Read Before…Reno Bass and his sister Sara are young, blond, blue-eyed twins from western Kansas. Raised right in a good Christian family, they’re pure as the driven snow. But when their family is massacred, they ride the Vengeance Trail to fulfill their father’s dying request—to purge the earth of the Devil’s spawn in the name of God...In the first book of this shocking new series, Reno and Sara’s farm is burned and their family murdered by a group of ex-Confederate soldiers known as the Devil’s Horde. These ex-Confederates—led by Major Eustace The Bad Old Man Montgomery and Major Black Bob Robert Hobbs—have a chip on their shoulders, and they’re burning a broad swath across the Yankee north, murdering, pillaging, and raping their way to the Colorado Territory…But when they burn the Bass farm, they find out not every follower of God is a sheep. Sworn to vengeance, Reno and Sara become black-winged avenging angels on a mission from God. Hounding the Confederate devils’ every step, these black-winged angels begin efficiently and bloodily killing them—one by one and two by two—reading to them from the Good Book while sending them back to Hell. 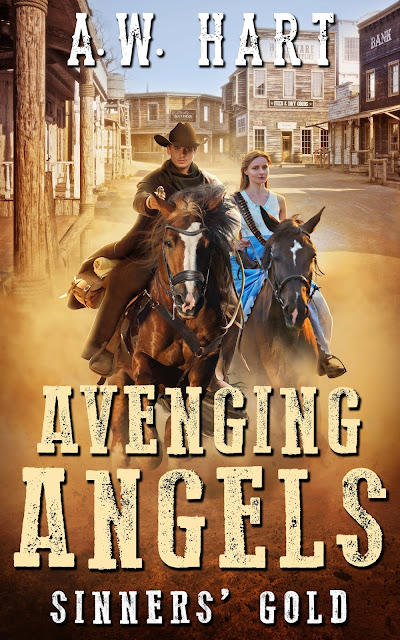 AVENGING ANGELS #2
SINNER’S GOLD
Wayne D. Dundee writing as A.W. Hart
After avenging the brutal slaughter of their family at the hands of Hell-spawned cutthroats, twins Reno and Sara Bass continue their quest to purge the West of the Devil's minions who prey on the vulnerable and unsuspecting…When they reluctantly accompany the hapless Brenda Walon to Hatchet, Nebraska, it quickly becomes clear Brenda is in deadly danger. The seemingly quiet town of Hatchet has many dark secrets—including the legend of hidden gold and the greedy desires of those willing to kill for it!Sara and Reno realize not all of the Devil's horde ride roughshod and bloody in the open. Now it's up to the Avenging Angels to protect the innocent by flushing out Hatchet's human demons and sending them back to Hell! 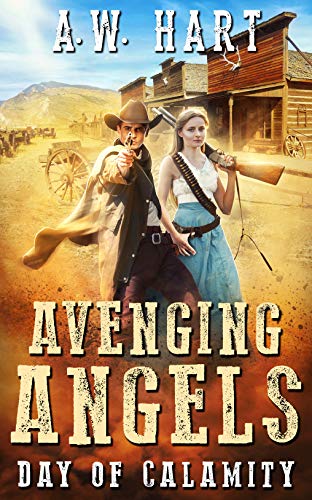 AVENGING ANGELS #3
DAY OF CALAMITY
Richard Prosch writing as A.W. Hart
Having survived the massacre of their Kansas home, Reno and Sara Bass now ride the vengeance trail for bloody justice and lucrative bounty. When two stolen angels and a preacher’s dark secret lure them to the violent train town of North Platte, shooting their way out isn’t just an option—it’s the Avenging Angels’ only choice...Hunted by the law, the army, and a shotgun named Pike, Reno and Sara land in a crucible of frontier fire that shakes their faith to the core and tests their gun hands like never before... 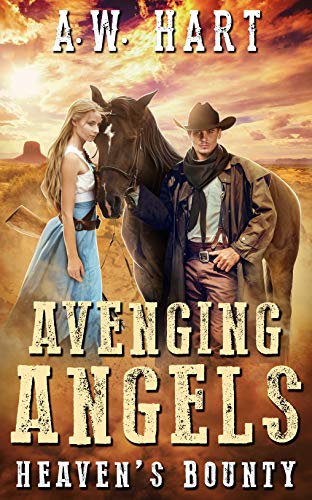 Saddle up for book four of the heart-pounding, bullet-burning, bible-thumping western series! Some treasures are best left buried...Lost for centuries, a journal belonging to a Spanish Conquistador lists the location of Heaven’s Bounty, a treasure of incalculable value—a treasure men are willing to kill for...Bounty hunters, Reno and Sara Bass, are used to hunting men, not treasure. But a chance encounter with a German scholar, and his lovely daughter, Hilde, drags the twins into a subterranean twilight world, which blurs the line between life and death...With a posse of ruthless mercenaries hot on their trail, Reno and Sara face insurmountable odds, and unspeakable terror as they unravel the secrets of a century’s old mystery. Best-selling author, A.W. Hart returns with another white-knuckle adventure, filled with shootouts, and the type of gun-blazing western action for which the Avenging Angels series is known. 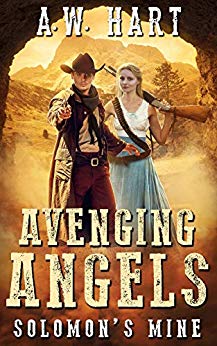 Saddle up for book five of the heart-pounding, bullet-burning, bible-thumping western series! Bounty hunting siblings Reno and Sarah ride out for the thousand-dollar price on the head of Butcher Bill Holt. Lucky for them only a Ute war party, a corrupt silver town, a traitorous informant and an army of killers stand in their way…The sadistic Butcher has assembled a guerrilla force of gun hawks, renegades and bandits to find and lay siege to a lost silver mine dug by former slaves. It's open war in the high desert between a host of murderers driven by greed and a bastion of free men willing to fight to the last drop of blood. And the Bass twins ride right into the crossfire…Readers wanting exciting, fast-paced Westerns have got good cause to look forward to what's coming down the trail.—Wayne D. Dundee
CLICK ON LINKS IN THE SIDEBAR TO BUY
By Sixgun Justice at December 26, 2019