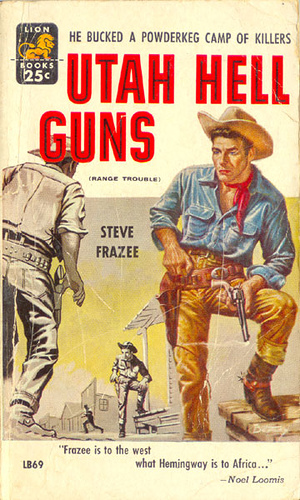 WESTERN NOVELS
UTAH HELL GUNS
AKA: RANGE TROUBLE
I love her, Keegan, and I intend to marry her—if and when she says she’ll have me. Right now the worst thing I could do for my own case would be to refuse to help you. Some women want only winners, but Laraine isn’t that kind, and if you go under you’re going to have the advantage of sympathy. I can’t afford to let you have any advantage, Keegan.

On the outs with his Union-loving family since leaving home to fight for the South, young Reno Keegan is on his way to Utah, answering his dad’s call for help, unsure what he’ll find. Old Liash Keegan, foreman at a tough-as-nails railroad construction camp, is bed ridden, shot through by an unknown assailant for unknown reasons. 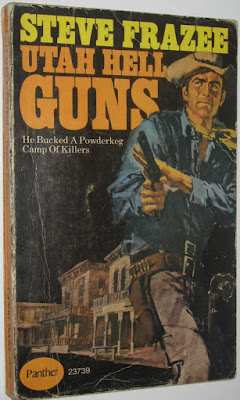 Was he attacked by a disgruntled worker? Or was it the competing road-grade outfit run by Penrose Capps? Or does someone else hope to end the old man’s progress on the west-moving grade? When young Reno narrowly misses his own date with a bullet, the son sets out to find an answer and, hopefully, regain his father’s trust at the same time.

A native of Colorado, Charles Stephen Frazee (1909—1992) worked in mining and construction, served in the Navy, and taught high-school journalism while doing his best to write honest westerns for the pulps that reflected the men and environment around him. He won first place for My Brother Down There in the 8th Annual Best Ellery Queen story competition, and eventually saw his tales printed in the slicks and carried to the movie and television screens. Frazee also penned a variety of media tie-in titles for young people including Lassie, Bonanza, and Walt Disney’s Zorro. 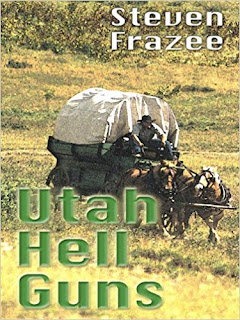 In everything I’ve read by Steve Frazee, the father-son relationship is featured one way or t’other. He also seems to have a lot of personal expertise at construction work and the daily relationships between men toiling together under a hot sun. I enjoyed the technical details of building and grading a rail bed, none of which came across overly pedantic. There’s wasn’t an over-abundance of action in the story, but enough mystery to keep me guessing until the end.

TO BUY A COPY OF UTAH HELL GUNS CLICK HERE