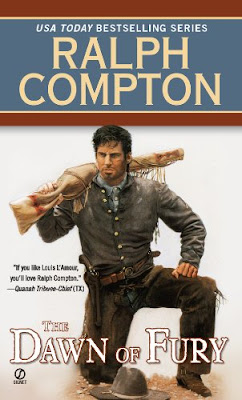 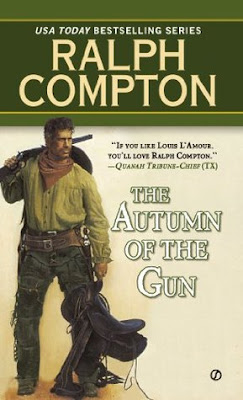 WESTERN WORDSLINGERS
RALPH COMPTON
Not many writers stand six-foot-eight-inches tall without their boots. Neither have many written twenty-three books in eight years, with several selling over a million copies and hitting the USA Today Bestseller List. The only wordslinger to hit the mark in both classifications is reader’s favorite, Ralph Compton.

Wearing his boots and his cowboy hat, the late Compton’s wiry frame rose head and shoulders above the crowd whenever he went. His most amazing accomplishment, however, was not growing tall, but his prolific telling of Western tall tales. At fifty-six-years-old, having little prior writing experience, he sat down and began the opening chapter of his first his first Western—The Goodnight Trail. In the next eight years, he wrote 22 more Westerns before cancer took him home at age 64. 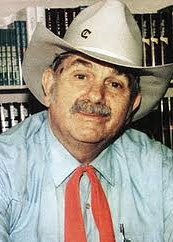 His canon of work became so popular, his publisher (Signet) used his legacy to build the Ralph Compton Brand. There have since been eight-two Westerns—authored by some of the best writers in the genre—published under the Ralph Compton banner.

On US 411, near Odenville, Alabama, drivers pass a sign claiming Home of Ralph Compton. It denotes the beginning of a six mile trek through the woods to the log cabin with the dirt floor where Compton was born. In his autobiography, Compton stated, “You walked three miles along the Seaboard Railroad track, climbed a cut bank and trudged another three miles through the woods.” Born in 1937, at the tail end of the Depression, Compton’s family struggled with the realities of poverty, “It seemed like we all started poor and went downhill from there. " 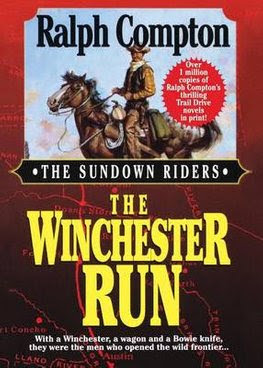 His mother had a sixth grade education; his father, fifth grade. “By the time FDR’s ‘team of mules, seed and fertilizer’ stake got to us, there were no mules.” His father settled for oxen instead of mules, along with seed and fertilizer. Inexperienced at best when it came to planting a crop, Compton said of his father, “In his best year, he made almost enough to repay what he owed the government.” 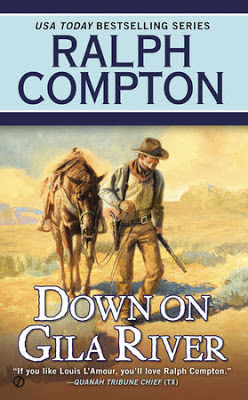 Compton graduated from St. Clair County High School in Odenville, a major accomplishment for a young boy in worn out clothes and rarely a full meal. Compton states, “In those days, welfare families were not looked on with favor. There were four of us, and we received the staggering sum of thirty-nine dollars a month. I owe my high school graduation to understanding teachers who provided odd jobs so I had the bare necessities." 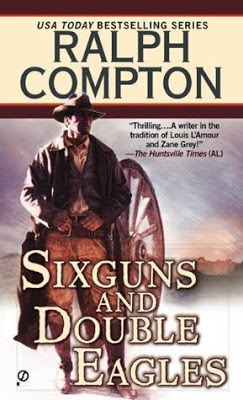 He points to his high school principal, Nancy Wilson (to whom he dedicated his first Western, The Goodnight Trail), for his love of reading and his ability to read with comprehension and retention. “Because I did read, she moved me ahead, encouraging me to read literature and history more advanced than my grade required. Before my graduation, I knew I wanted to write, although I wasn’t sure what."

Compton served in the Army during the Korean War. When he returned home, he was still unsure of his career direction. He joined forces with his brother, Bill, a skilled guitarist with a good voice. They formed a bluegrass group, and set out to play the local circuit of legion halls, armories, and schools. They played live on local radio stations, often racing from station to station to reach the widest audience possible. Compton recalled, “Most little stations provided time for free on Saturday afternoon, usually fifteen to thirty minutes for those enthusiastic enough—or dumb enough—to donate their talent for the exposure.” 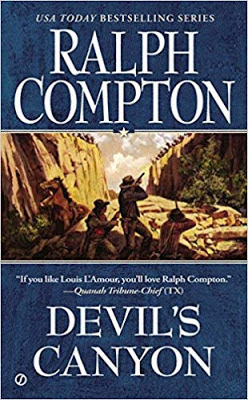 Ralph traveled to Nashville where he struggled as a songwriter. He co-founded The Rhinestone Rooster, a tabloid magazine, but quickly went broke. He borrowed money to keep the magazine afloat, but quickly went broke again. Not willing to give up, he turned The Rhinestone Rooster into a record label, but still did not find enough success to make the venture worthwhile. Jobs as a radio announcer, a newspaper columnist, and other odd jobs followed.

In the summer of 1988 (“When I was pretty well fed up with the music business...”), the then fifty-four-year-old Compton began writing a novel. He wrote what he knew, “...a Southern novel, a hard times tale of growing up during the depression." 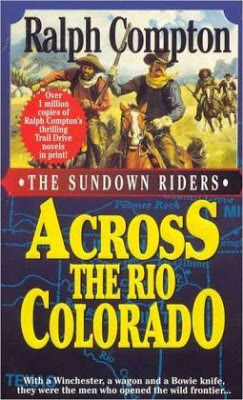 Bob Robertson, a literary agent who read the manuscript, felt Compton’s writing showed promise. He didn’t, however, believe he could sell the novel to a publisher as the market was saturated with similar coming of age tales. Robertson was impressed enough with Compton’s writing to ask him a straightforward question...”Can you write a western?” Compton’s reply would ultimately change his life...“I don’t know. I like Westerns, but I’ve never written one. Let me try.” Writing feverishly in every spare moment around his forty-hour a week nighttime work schedule, he completed a shoot-‘em-up 185 page manuscript. However, when he showed it to Robertson, the agent told him it was good, but had nothing to distinguish it from other Westerns.

His agent then offered more sage advice, “Write the kind of Western you like. And plan on writing at least three books, a minimum of three-hundred and fifty pages each.” This seemed overwhelming to Compton, who felt he’d already done the best he could. But Robertson continued to encourage him. The agent wanted a potential series, something with a hook that had not been done before. Over the next several weeks Compton and Robertson kicked around ideas. They wanted a concept to embody all the exciting aspects of the Western, yet be unique in its presentation. From their collaboration, the concept of the Trail Drive series was created. 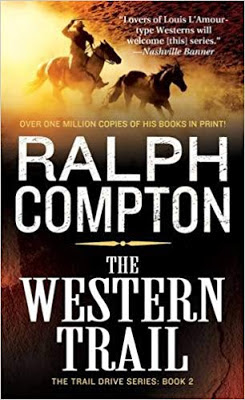 In January of 1990, after much sweat and research, Compton presented Robertson with a detailed synopsis of the first three books in the series—The Goodnight Trail, The Western Trail, and The Chisholm Trail. Robertson enthusiastically approved. Eight months later, Compton finished writing The Goodnight Trail, a rip-roaring western about the cattle drive which established a new route from Texas to Colorado.

Compton skillfully mixed fact with fiction as told the tale former Texas Rangers Benton McCaleb, Will Elliot, and Brazos Gifford to ride the trail alongside the real life Charles Goodnight. Compton’s characters were fresh and alive, jumping off the page with the historical background accuracy that would become his trademark. The rights to The Goodnight Trail sold quickly, establishing a profitable long-term relationship with publishers St. Martin’s Press and Signet. It sold more than 1 million copies and was chosen by the Western Writers of America as a finalist for their Medicine Pipe Bearer Award—given to the best debut Western of the year. 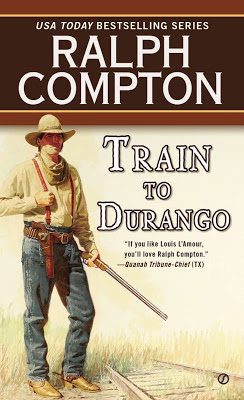 Of his writing, Compton also explained, “I depend solely on three elements: (1) a powerful sense of time and place, (2) a strong, fast-paced story, with interesting sub-plots, and (3) powerful, memorable characters.”

His inspiration for the strong characters and style of storytelling he brought to his own work was the television series Gunsmoke. In a 1993 issue of The Roundup, a publication of the Western Writers of America, Compton returned to the question that started it all...“Can you write a western? I could, and thank God, I did. I regret I lacked the confidence and courage to do it sooner.”

Compton had read many of the great Western writers. While believing he had developed his own style, he claimed, “I shamelessly adopted one element, which I admired most in the work of Louis L’Amour. While there was romance in his books, there was no graphic, shocking sex."

Ten more Westerns in the Trail Series followed. Books in the Sundown Rider series and the Border Empire series, along with a dozen other Westerns added to his prolific, fast paced output. Like a man knowing he is running out of time, Compton authored more than two dozen novels during the last decade of his life. Six Guns and Double Eagles, The California Trail, and The Shawnee Trail were all bestsellers in 1997.

Compton passed away from cancer in Nashville, Tennessee at age sixty-four. His journey from dirt floor beginnings to bestselling author is one of hope and perseverance, as inspiring as any of his Westerns.

In his own words, “While the Old West lives only in the pages of history, I believe there’s something within each of us that longs for those days when there was yet another frontier to be conquered, another mountain to cross, and the thrill of the unknown. I believe the Old West will live forever—perhaps not in Hollywood, but in the hearts and minds of men and women who refuse to let it die.” 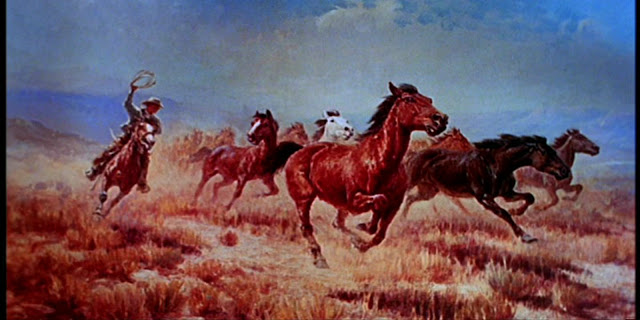 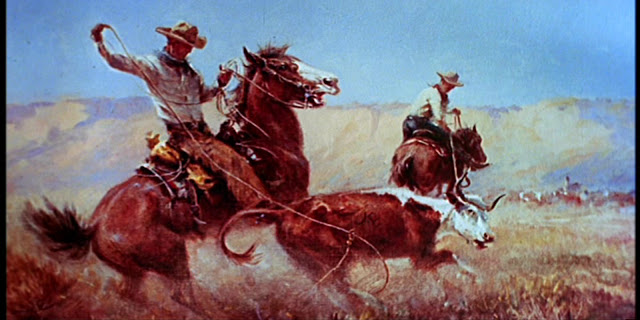