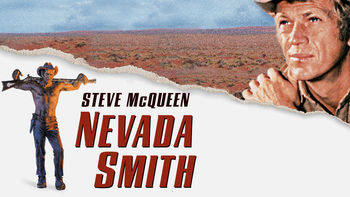 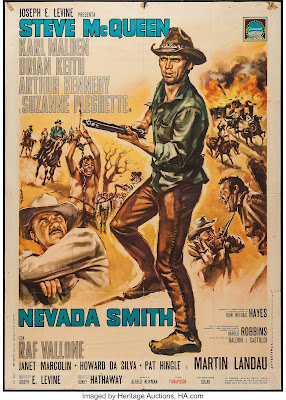 Thinking him foolish, but determined, Cord teaches Nevada the skills of a gunslinger, telling him, “Now, you get to where you can do that with either hand when you’re half-drunk or half-awake or inside a dark room or off the back of a running horse, you might stand a chance...a small chance.”

Nevada becomes a dogged man-tracker as he learns to read and write, how to follow clues and sign, and how to use fear to make his quarries sweat after the killing starts. My favorite line in the film deals directly with this scene when Jonas Cord explains, “It ain't that easy, kid. Findin' em's one thing. Killin' em's another.” 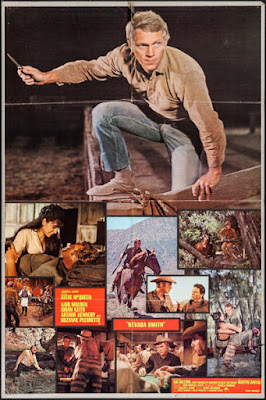 Nevada Smith’s character is supposed to be sixteen, which was a stretch for the 36-year-old Steve McQueen. With blond hair and blue eyes, he doesn’t look half Kiowa either. Brian Keith is solid as the itinerant gunsmith, and Karl Malden is suitably menacing as the main villain. Suzanne Pleshette is underused as the young Cajun Pilar whose limited screen time comes to a nasty end.

It is, however, the professionalism of the secondary characters that keeps the film on track—Pat Hingle as a prison trustee, Howard da Silva as the Louisiana prison camp warden, along with Iron Eyes Cody and Strother Martin in uncredited bit parts. The not yet WKRP’s blonde bombshell, Loni Anderson can be spotted sporting a headfull of brunette tresses as a dance hall girl with a line or two of dialogue. 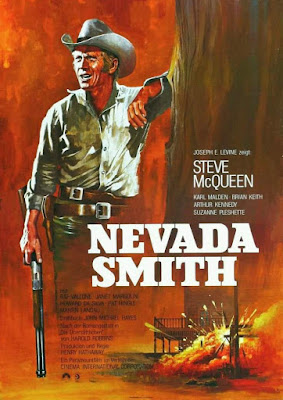 Suffering from uninspired directing and an episodic nature, Nevada Smith could be cast aside as a predictable actioneer. However, I found I was able to overlook the film’s shortcomings for two reasons. First is the relationship between Nevada and Jonas Cord. It is paternal in nature, giving Nevada back an emotional handhold he lost with the murder of his parents. Despite his inclinations, Cord takes naturally to the role of mentor. Brian Keith’s gruff portrayal of Cord has depth and emotion, showing Cord truly cares what happens to Nevada. 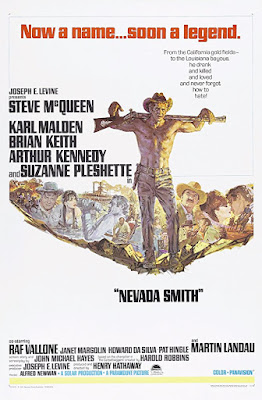 This leads to my second reason for rating the film highly. Cord’s warnings about the cost of vengeance, and the ability to recover from tragedy in other ways, can be seen to begin slowly working on Nevada. The life lessons Cord taught do not fall fallow. Instead, they lead to a deep character change within Nevada, which plays out in the film’s finale. This multi-layered examination of vengeance and its effect on the human spirit raise Nevada Smith from mundane to memorable. 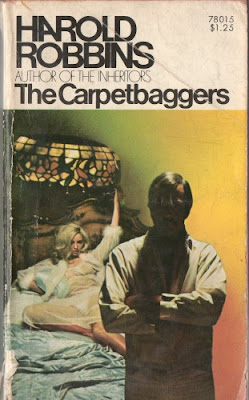 The name Nevada Smith was the inspiration for the name Indiana Jones. The Raiders of the Lost Ark character was originally named Indiana Smith. George Lucas named him Indiana after his dog, and Smith after this movie. It was, of course, later changed to Indiana Jones.

While completely independent of each other, Nevada Smith (1966) can be seen as a prequel to a movie made two years earlier, The Carpetbaggers (1964). Based on the sleazy Harold Robbins novel of the same name, The Carpetbaggers starred George Peppard as Jonas Cord and Alan Ladd (in his final film role) as former western gunslinger turned actor, Nevada Smith.

TO BUY A DVD OF NEVADA SMITH CLICK HERE 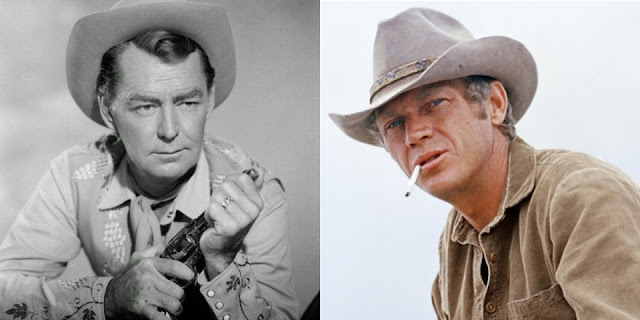