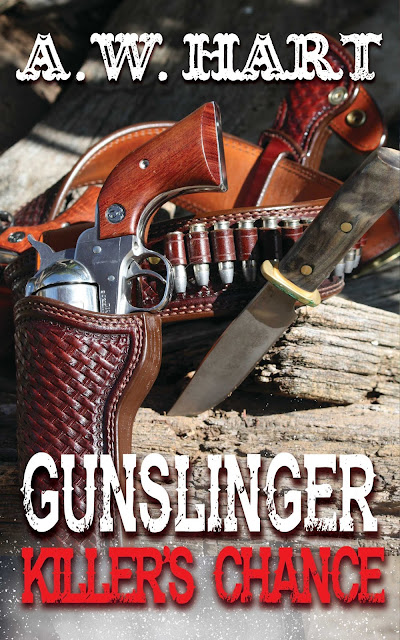 GUNSLINGER #1
KILLER’S CHANCE
Mel Odom writing as A.W. Hart
Fourteen-year-old Connor Mack dreams of a life adventure while stuck plowing, doing all the chores, and being treated as a slave on the half barren family spread in East Texas. He plans to one day flee the beatings delivered by his hulking older brothers and lazy pa. But he knows if he does, he must take his twin sister Abby—who is not always right in the head—with him. He gets his chance when River Hicks, a man wanted for the murder of a policeman in Fort Worth, rides in with a pack of bounty hunters on his trail. When the gun smoke clears, Connor has killed men for the first time, but he also knows this is his and Abby’s time to escape their life of abuse…Knowing the law will soon be on their heels, they follow Hicks—an outlaw driven by his own demons, and by deep secrets which somehow involve the Mack twins…Conner has a lot of learning and growing up to do—and he has to stay alive to do it. 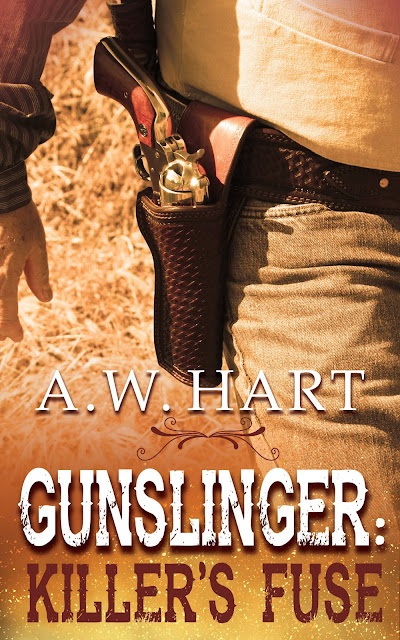 GUNSLINGER #2
KILLER’S FUSE
Eric Beetner writing as A.W. Hart
While waiting for his quarry to arrive in the mining town of Willimet, Hicks joins a pair of outlaws with a scheme to find a lost cache of gold…With Hicks gone, Conner and Abby are welcomed into the home of a local widow—the richest lady in town with a deadly secret agenda. When the widow develops an unnatural attachment to Abby, and her three unbalanced sons turn deadly, the beautiful mansion on the hill turns into a possessed house of horrors. Connor can feel Abby slipping away as the house and the widow put a spell on her. When he uncovers the family’s secrets, he knows he’s in a desperate race to save Abby…The fuse has been lit and it’s burning down fast for both gunslingers. Can they join forces again and get away before it all blows up in their faces? 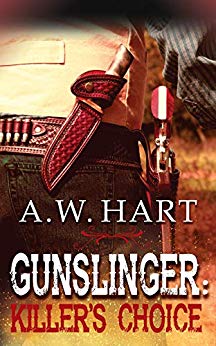 GUNSLINGER #3
KILLER’S CHOICE
Mike Black writing as A.W. Hart
An ostensibly simple, but hazardous job of delivering some much-needed nitroglycerin components to a burgeoning railroad town in the Arizona Territory proves problematic for the trio of River Hicks, Connor Mack and his twin sister, Abby…Along the way they rescue a Chinese man on the verge of being lynched by a pack of crooked deputies. Moved by the Chinese man’s tale of his quest to free his beautiful fiancée from the savage grip of human traffickers, they are surprised and dismayed to find the girl is being held in the town of Woodman, which is their own destination. The town is run by a brutal, self-aggrandizing strongman who has taken over and renamed the town after himself. This self-anointed Duke also has ties to a mysterious financial backer who, unbeknownst to everyone, has enlisted an unscrupulous Pinkerton detective and a professional killer, known as The Regulator, to track down and kill Hicks, Connor, and Abby…All trails unite in the dusty streets of the small, Arizona town where Hicks, Connor, and Abby come face to face with the vicious array of killers for a final showdown they soon realize has become a killer’s choice. 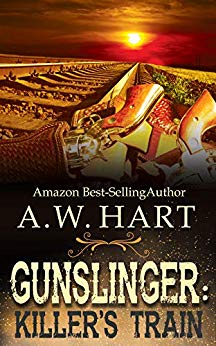 From the author of the fast-paced Avenging Angels series comes a new kind of western hero…Gunman River Hicks, along with twins Connor and Abby Mack, his wary teenage trail companions, stop in Abilene to catch their breath. But when Abby kills the sheriff's son in self-defense, they are forced to flee to Colorado, pursued by a vengeful posse…Signing on as regulators for the Rocky Mountain Railroad they are assigned to protect a gold shipment. Loaded with business magnates, miners, gamblers, and deadbeats, the train lacks only a spark to explode into violence…When the murderous Doyle Gang attempts to rob the train by blowing up the track, the outgunned trio are thrown in to bullet blazing danger. With the unexpected help of four Arapaho braves, whose presence on the train has bitterly divided the passengers, it's an all-out war against the combined fury of the Doyle Gang and the Sheriff's posse…This is one trip they'll never forget.


CLICK ON SIDEBAR LINKS TO BUY
By Sixgun Justice at December 26, 2019