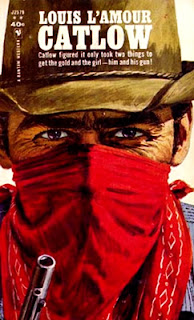 Ben Cowan and Abijah Bijah Catlow had been bound as friends since childhood. By the time they reached manhood, however, they had drifted apart. Ben had taken the path to wearing a tin star, while Catlow followed a more serpentine trail to becoming a top cowhand with a wild streak who followed the spirit of the law if not the letter. By mutual consent, they avoid each other so as not to force a confrontation. But after a disastrous confrontation with a band of greedy ranchers, Catlow is branded an outlaw and it is U.S. Marshal Ben Cowan’s job to bring him in alive—if Catlow will let him. 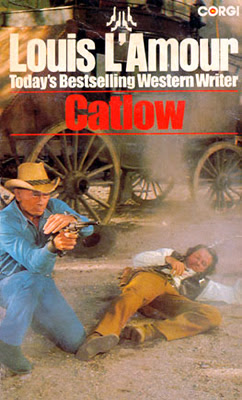 When Catlow escapes to Mexico, determined to pull off a Confederate gold heist and retire, Ben is hot on his trail. But circumstances will force the two men on opposite sides of the law to become allies again, fighting for survival as they are pursued across the harsh Mexican desert by forces who want them both dead.

While Catlow is clearly from the early stages of L’Amour’s writing career, it has a stripped down charm I found satisfying. I enjoyed the interplay between Catlow and Cowan—friends turned reluctant adversaries—and found myself rooting for both characters to win. 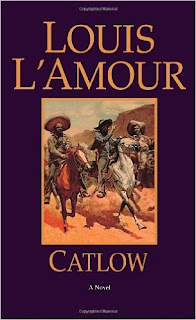 L’Amour was a master at creating this type of reader engagement and, because Catlow is so stripped down, an attentive reader can get a glimpse of the behind the scenes writing mechanics. I found this fascinating. There is some justification to believe Catlow was an unsold pulp story L’Amour whipped into shape quickly to keep up with the demands of his publisher’s schedule after he (justifiably) took too long expanding the novelization of the movie How The West Was Won.


As a side note to clear up an often confused fact, the movie How the West Was Won was based on a series of Life magazine articles from 1959—not an original novel by L’Amour. In actuality, James R. Webb’s screenplay was brilliantly novelized by L’Amour to coincide with the release of the film. L’Amour, however, went beyond simply novelizing the screenplay. With his usual attention to details and characters, he expanded the vision of the screenplay into a true novel, which became one of his most renown. 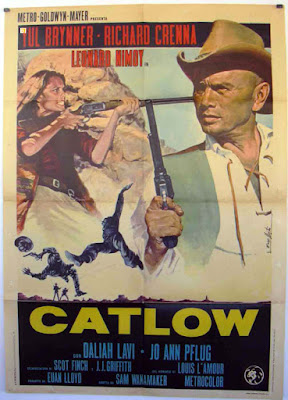 The movie version of Catlow will never be considered a classic Western, but it remains an entertaining film. Anchored by the presence of Yul Brynner as Catlow—displaying a surprising sardonic side appropriate to the character—and Richard Crenna as Ben Cowan, the movie is notable for the appearance of Leonard Nimoy as the mercenary Miller, the villain of the piece.

Leonard Nimoy mentioned this film in both of his autobiographies as it gave him a chance to break away from his role as Spock on Star Trek. He stated the time during which he made the film was one of the happiest periods of his life, even though his part was rather brief. 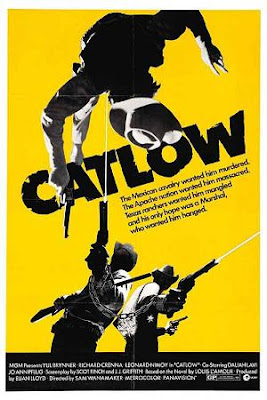 Like the book, the movie boils down to two characters, on different sides of the law, who remain great friends while unafraid to punch, or shoot, at each other to gain an advantage. Released in 1971, Catlow has a rawness typical to Westerns of the time period, including experimental filming techniques such as the extremely fast editing of some scenes.