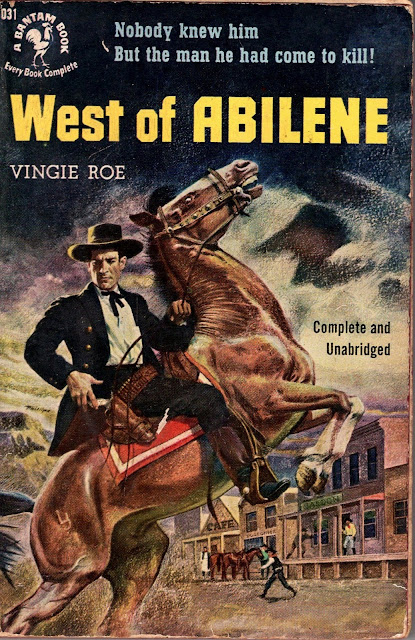 WESTERN NOVELS
WEST OF ABILENE
VINGIE ROE
Vingie Row was born in 1879, raised in Oklahoma territory and settled in Northern California ca. 1907. Shortly thereafter she began writing novels. She wrote until her death in 1957, with her most popular novels The Maid of the Whispering Hills and Tharon of Lost Valley, both readily available.

Working my way through a stack of vintage paperbacks, I was ambivalent when I saw Roe’s West of Abilene up next in the pile.  I was happy to finally get the chance to read something by Roe, unhappy at the condition of my Pocket Books copy and what looked like a troublesome read—the spine was obviously damaged, the pages dry and brittle. Undaunted, I began and got fifty pages in before the back half of the book  dropped out, giving me not one volume to read, but three coverless pamphlets (with the promise of more if I wasn’t careful). 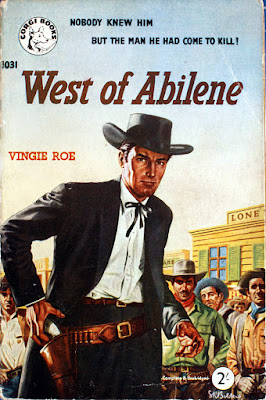 Too far into the story to put off the conclusion, I opted not to track down a new copy, but persevered to the end.  By the time I was rifling through those pages, Roe had increased the tension to such an extent I didn’t wonder the back part of the book was literally springing apart. Honestly, reading West of Abilene could not have been better with a pristine edition smelling of fresh ink.

It starts out with a familiar setup.  A trail town is under the thumb of a local cattle baron, the swaggering, arrogant, Big Red Kinkaid, whose only virtue is his daughter, the lovely Copper Ann. Naturally when Johnny Velantry comes to town and bests the big man in front of everyone, trouble follows. But Velantry is there because of Kinkaid and, as the tale unfolds, the secret past that ties the two men together becomes darkly apparent.  As revenge tales go, it’s a little slow-moving and melodramatic but Roe manages to give her otherwise cliché characters some unique attributes that kept me reading. Her understanding of trail town economics and mob mentality also helped the action ring true...I was glued to the story, even as the story itself came unglued.


TO BUY A COPY OF WEST OF
ABILENE CLICK HERE