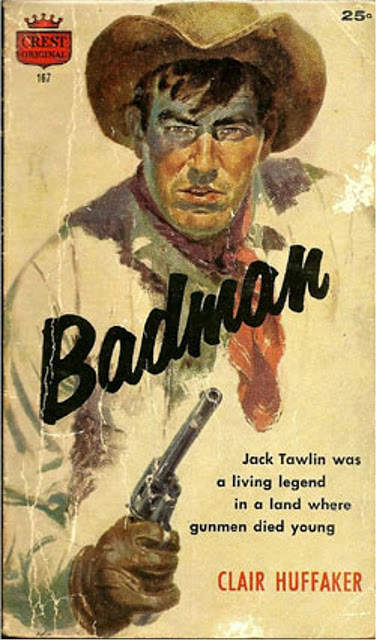 WESTERN NOVELS
BADMAN/THE WAR WAGON
CLAIR HUFFAKER
After a stint in Yuma Prison in Arizona, the Badman of the title, Jack ‘Taw’ Tawlin, returns home to Pawnee Fork, South Dakota, to visit his wild younger brother, Jess. The sheriff and citizens are fearful of Taw’s violent reputation for gunplay and brawling. Reluctantly, as he does not want to return to prison, he agrees to help Jess and his partners rob Old Ironsides—a steel-reinforced stagecoach transporting $300,000 worth of gold dust. 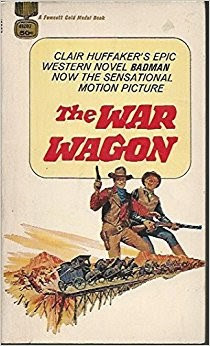 What follows is a Western version of a hardboiled crime novel—in particular one of Richard Stark’s Parker novels in which the heist always goes wrong. Throw in Taw’s attraction to Jess’ mistreated wife and you have an ingenious, tense, bolting stagecoach of a novel.

A veteran of World War II, Badman author Clair Huffaker became one of the most prominent and successful writers of Western novels and screenplays for two decades. During the height of the Western’s popularity, he wrote the screenplay adaptations for five of his twelve novels—Flaming Lance (filmed as Flaming Star), Posse from Hell, Guns of Rio Conchos (filmed as Rio Conchos), Badman (filmed as The War Wagon), Seven Ways from Sundown, and Nobody Loves a Drunken Indian (filmed as Flap)—which starred many big name actors including John Wayne, Kirk Douglas and Elvis Presley. 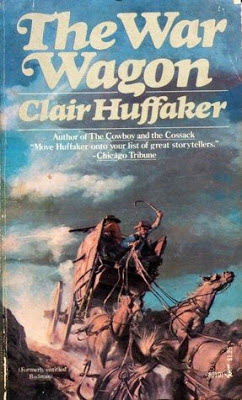 He also wrote other successful Western films, such as 100 Rifles (Raquel Welch/Jim Brown), The Devil’s Backbone (Chuck Connors), The Comancheros (John Wayne), and Chino (Charles Bronson). His other major film credits include Hellfighters (John Wayne), Tarzan and the Valley of Gold (Mike Henry), and more. He was a mainstay writer for the Western TV series Riverboat, The Rifleman, Rawhide, Bonanza, Lawman, Colt .45, Outlaws, Destry, The Virginian and Daniel Boone. He even broke away from Westerns long enough to write an episode of Twelve O’Clock High. 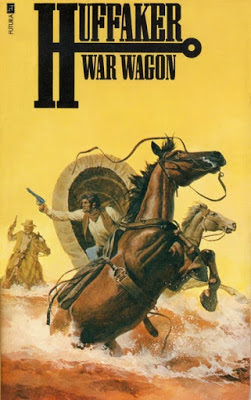 The original source for Badman was Huffaker’s short story Holdup at Stony Flat, published in Ranch Romances. Subsequent editions of Badman carried the title The War Wagon to tie in with the movie, though there was only one edition with artwork from the movie on the cover. No matter the title, Badman packs its lean 128 pages with cracking action and deft plotting—a real deal for the twenty-five cent cover price of the original Crest edition.

For the movie, the war wagon was built mostly of plywood painted to look like iron. To complete the illusion, metal clanging sound effects were added when the war wagon’s doors were open or slammed closed. For many years, at least through the 1980s, the deteriorating remains of the war wagon were displayed in The Boneyard—a collection of old outdoor movie props, which was part of Universal Studios’ Backlot Tour. 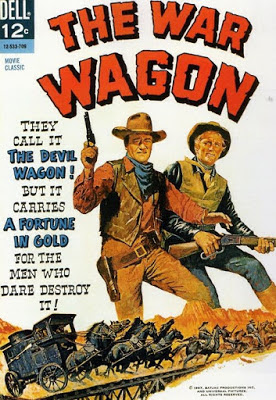 The opening credits for 1967’s The War Wagon mirrors the book’s first pages as the full 47.5 feet, from the lead horse to the back end, of the war wagon flies across the prairie at top speed, horses frothing at the gallop and a troop of outriders racing behind—amazing. However, the film swiftly diverges in nearly every detail.

Huffaker’s prose in the novel is edgy and sincere, but his take on the screenplay is much lighter, fitting well with director Burt Kennedy’s tongue-in-cheek style. In another major change in the film, Kirk Douglas plays a high-class killer named Lomax who is hired to kill Taw (John Wayne). The banter and one-upmanship between Lomax and Taw is priceless. After they simultaneously gun down two hapless henchmen, Lomax comments, Mine hit the ground first. 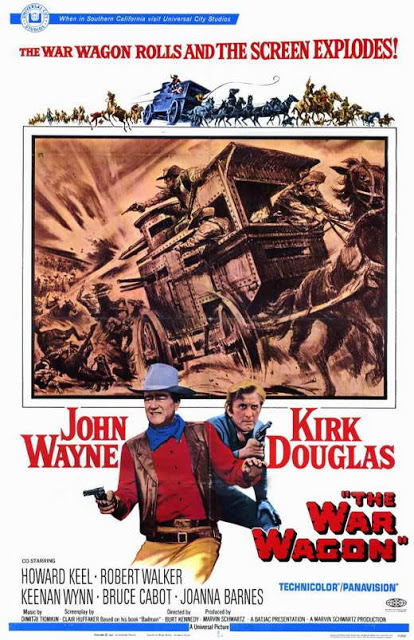