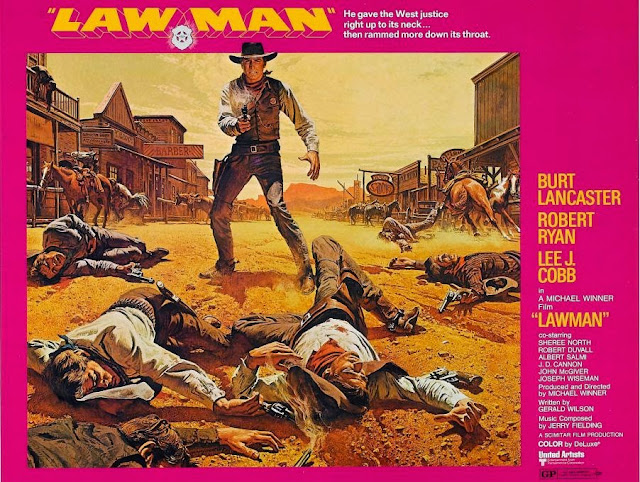 WESTERN MOVIES
LAWMAN
“I never drew first on a man in my life. That's the
only way to stay clean, you play it by the rules.
Without the rules, you're nothing.”

After a long cattle drive, cowboys employed by land baron Vince Bronson (Lee J. Cobb) are celebrating in Bannock. They inevitably get drunk and shoot up the town, accidentally killing an old man. Unaware of the death, they return to Sabbath, a town controlled by the reasonably benevolent Bronson. Sabbath’s aging marshal, Cotton Ryan (Robert Ryan), has lost his nerve. willing to as he is told for a quiet life. Months later, Bannock sheriff Jered Maddox (a steely Burt Lancaster) rides in to Sabbath determined to arrest the responsible cowboys for murder and return them to Bannock for trial and, eventually, hanging. This duty does not stop him, however, from dallying with an old flame (Sheree North), who makes the mistake of thinking the hardline Maddox may have changed, or is even possible of change.

When Bronson, the powerful land baron, finds out about the death, he offers to make amends by paying generous compensation to the victim’s family. Nobody wants a trial, including the smaller ranchers who can’t afford to be away as part of a jury. The implication being the victim’s life isn’t worth the inconvenience since he was old. Most see Bronson’s offer as reasonable. The cynical Maddox does not. He is aware the cowboys will most likely get off in return for a hefty bribe, but refuse to allow the corruption of others to avert him from the pursuit of his own duties. Bronson still wants to negotiate and make further concessions. But when his oldest friend deliberately challenges Maddox and is shot down, Bronson leads the rest of the town in defiance of the remorseless lawman.

Burt Lancaster originally built his career on tough guy roles. However, in the early 1950s, he began taking on more morally complex and challenging roles. As a result, he became regarded as one of the best actors of his generation.

As Cotton Ryan, Sabbath’s ineffectual sheriff, Robert Ryan was featured in one of his last roles. Ryan claimed to prefer Lawman to The Wild Bunch, in which he also starred—definitely a minority opinion, especially in light of the dramatic impact The Wild Bunch had on the future of cinema Westerns.

Lawman works because of a script filled with moral quandaries without clear answers. Cattle baron Vincent Bronson, is a reluctant villain. He is a reasonable man with a deeper feeling for  humanity than the law and order Maddox. As the film proceeds there is a growing perception Maddox is not the stalwart hero he wants to appear. There is a rage in him, a debilitating awareness of the futility of pursuing justice in a corrupt society. Is he a man inexorably caught in the jaws of duty, or is duty a sham he hides behind to consciously deliver his own hard-line version of justice?

Marching toward the inevitable climatic shootout, cracks begin to show in Maddox’s unyielding veneer. But he hardens himself, stating, “A man gets caught in his own doing. You can’t change what you are. And if you try, something always calls you back.” Maddox has made his choice to do battle—but has he forced the gunfight, or has it been forced upon him? No matter what happens there will be no winners.

Lawman also featured Robert Duvall in one of his first Western roles. It was also the debut for Richard Jordan, who would have a bigger role opposite Lancaster in Valdez Is Coming, also released in 1971.

There was a novelization of Lawman written by Grant Freeling who wrote many true stories for the men’s adventure magazines.