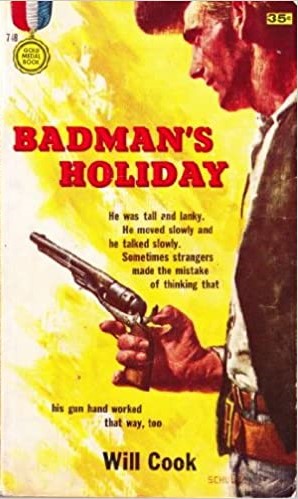 If you’ve ever seen an episode of Columbo, then you’ll be familiar with this book’s presentation of its plot. We follow the three men as they plan and execute their crime, a robbery that accidentally leads to murder, then see McKeever’s investigation and his dogged determination to learn the truth. Things grow pretty dire for him, with his job, his reputation, and even his love life under threat as the story progresses, but the screws tighten on the villains as well, and McKeever himself is fairly clever.

Cook writes well, though most of the elements of the romantic subplot were forced, which takes the book down a notch. This is also much more of a mystery than the typical oater, which is fine by me, having read too many evil cattle baron stories, but if you’re only planning on reading a few westerns this year you might want to seek one out with more Indians, gunfighters, and rustlers…RATING: B- 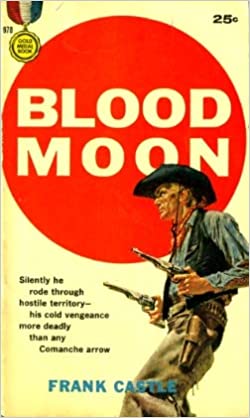 BLOOD MOON
FRANK CASTLE
I’ve seen Castle’s work disparaged by some reviewers in the past, and so was a little worried when I opened up this book, short though it is at 159 pages. I was somewhat buoyed by the knowledge Gold Medal had published a number of Castle books during their golden age, then dismayed by the first six pages, full of multiple flashbacks that filled out a back story any other GM writer I’ve read recently would have woven into the story while it unfolded.

But once I was through that point, Castle’s prose was solid and engaging, and he always seemed to know exactly when to add in a new twist. He had great command of his action scenes and knew how to pile on the tension.

The premise is a nice variation. Dain Burnett is after the man and woman who murdered his brother. He rides into Comanche territory to track them down, only to discover he’s in the middle of a Comanche uprising. The man he’s hunting is dead, and his female accomplice sure doesn’t ACT like the kind of woman who would have been involved, but he’s determined to bring her in to stand trial anyway. Throw in a seasoned scout, some cavalry men trapped behind enemy lines, and some no-accounts with an agenda of their own, not to mention a bunch of Comanches on the warpath, and you have yourself a pretty good page turner. The romance subplot is a little obvious, but its resolution still surprised me a little. The end result is that I’ll be reading more Castle without trepidation. I downgraded it just a little for that sloppy opening…RATING: B- 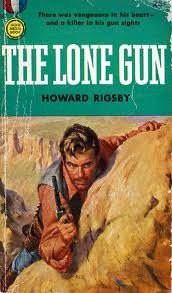 THE LONE GUN
HOWARD RIGSBY
Howard Rigsby, who sometimes wrote as Vechel Howard, is a new favorite of mine. I’ve enjoyed every western of his I’ve read, most especially The Last Sunset, a Gold Medal to which I’d awarded a rare A grade.

The Lone Gun isn’t quite in the same category, but on my grading scale, a B is a standout book, and a novel I think most western readers would enjoy. Young Brooks is the ramrod for a cattle outfit run by old man Tilton, who has some old fashioned ideas that he likes to lecture his crew about, among them not paying his men off after a long trail drive ends on a Sunday evening (they can wait for the morning, as he feels is proper).

When Brooks publically stands up for the men and demands the pay, he singles himself out as the prime suspect when Tilton turns up dead a few days later. Brooks doesn’t even realize how bad it looks for himself when he comes up on the body and reports the murder, and soon finds himself locked in jail.

Rigsby ratchets up tension pretty fast from there. Brooks feels pretty badly about what happened to Tilton, who was something of a father figure to him, the nasty sheriff is making a play for his girl, and there’s a lynch mob hungry for his blood – not to mention that the sheriff and the prosecutor seem to think its an open and shut case anyway.

What happens next, and Brooks’ long, tension-filled quest to clear his name, makes for a compelling read. Rigsby does a great job keeping us guessing about who’s really behind the murder, to the point we start feeling as paranoid as Brooks himself…RATING: B

TROUBLE AT BORRASCA RIM
MARK OWEN
A crackerjack opening, with the capable Jeff Martin surviving an ambush courtesy of his gun hand and clever wits, launches us into the first chapters of this book. Martin’s been called in to aid an old friend whose timber property is under threat, and quickly finds himself in the middle of a town bristling with tension. To make things even worse, the lead gun man of the opposing group is out for Martin’s head – but only if he can shoot him while a certain woman is in town to see him take his vengeance.

Owen writes some great action scenes, and some nice hardboiled scaffolding is here, but a lot of the secondary characters are ciphers, and there’s a little too much summary and jumping around, as well as an unconvincing love triangle. For all that, there also are some nice twists, and Martin’s relationship with the gun man from his past and the man’s twisted ambitions is actually quite clever.

So, while I can only grade this as a competent read, I’m curious to see more of Owen’s work. It might be that in another book he could successfully raise the rest of his plot features to the level of the strongest elements he showcased here…RATING: C
By Sixgun Justice at March 11, 2020