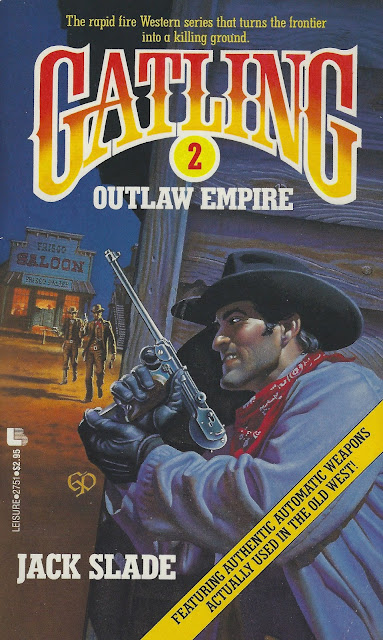 WESTERN NOVELS
GATLING #2
OUTLAW EMPIRE
JACK SLADE
(PETER MCCURTIN)
A gimmick series that never strays far from the gimmick. The premise is a gun-loving vigilante with a real hatred for evil-doers and a real love for experimental firearms gets the greatest dream job since Li’l Abner got hired to test mattresses. He’s employed by Hiram Maxim who wants the self-named Gatling to field test automatic and self-loading weaponry in real combat situations. Maxim shells out a bounty and pays all expenses for Gatling to hunt down and murder criminals with new-to-the-market pistols, machine guns and cannons. This doesn’t make Gatling many friends in the underworld and so he often finds himself shooting his way out one tight corner after another.

In this outing, Gatling’s hunt for a gangster boss, with grandiose plans to build a kind of nation-wide criminal cooperative takes him from San Francisco to the bayous of Louisiana in a bloody cross-country tour that has him using a Skoda machine gun, a Borchardt autoloading pistol, Lee-Enfield rifle and a Hotchkiss cannon. Along the way, immigrant hoods die by the bushel load until we get to a quite harrowing extended chase through the swamps of the Mississippi delta where Gatling faces dying of fever, exhaustion, snakebite or gators before he can reach his intended quarry.

It’s an adult western in that it doesn’t watch its language and deals with some bluntly described skeevy subject matter including a floating pedo-brothel that Gatling blows up with dynamite on the kid’s night off! But there’s none of the sex scenes that are standard in series like this. At least in this entry anyway. And the descriptions of violence don’t go too far over the top. Gatling, like any of our favorite gun-toting vigilantes, is not a sadist. He just likes blowing baddies up real good when he’s not pumping them full of lead.

It’s all a pretty sublime set-up for a series of action epics especially if you prefer your body counts neat. And Slade writes with a real authority about locales, history and, of course, weapons. Not sure how accurate any of his assertions are here but that’s where the authority comes in, right? It sure sounds right when he asserts it.

My only problem with the series is that Gatling’s characterization doesn’t go much beyond him being a big, tough bastard who’s good with any gun you hand him. He’s not driven by revenge or a sense of right and wrong. The guy just loves guns and using them on anyone he decides derives being shot full of holes. And I’m okay with that, I really am. But there’s little reason to actually care about the guy beyond some references to a tribe of Zuni Indians that he owes an allegiance to and helps support with generous payments from Maxim. His back stories with the Zunis was dealt with in the first book of the series and all they do from there on out is provide a back story told through some exposition sequences in which Gatling recalls them. Other than that, these folks that are so important to him remain faceless and nameless.