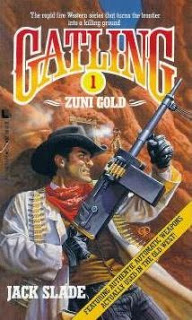 WESTERN NOVELS
THE GATLING SERIES
MCCURTIN, SLADE, GATLING, AND GARRITY
In 1968, Peter McCurtin sold two books to iconic sleaze paperback imprint Midwood, which was run by publisher Harry Shorten. Shorten later hired McCurtin to edit books for his other low end paperback houses, Tower, Belmont, and Leisure Books. While there, McCurtin not only edited manuscripts, but wrote books under his own name and a number of publishing house owned pseudonyms. He also turned his own byline into a house pseudonym, hiring other wordslingers to produce books as Peter McCurtin—all of which has created much confusion for collectors and completists. 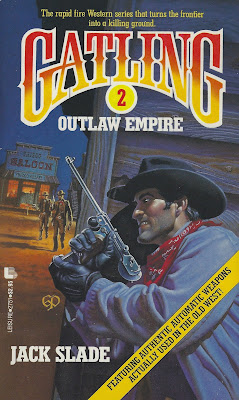 Paperback scholar Lynn Munroe has done an excellent job of researching McCurtin’s history and output, all of which can be found on his website.

McCurtin first used the house name Jake Slade for the Lassiter series he created in 1969. He later used the Slade pseudonym for several entries in the Fargo and Sundance series—both created and originally written by revered western writer Ben Haas (under the pseudonym John Benteen) and edited by McCurtin. After Haas passed away, McCurtin took over the writing chores on the Sundance novels, publishing them under his own name. McCurtin wrote many of these books, but in some instances he provided plot ideas or half written novels to his crew of regular writers—the most prominent being George Harmon Smith—to complete. 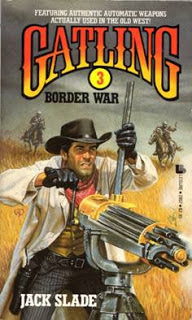 While the pseudonym Jack Slade originally hid the identity many different writers, McCurtin resurrected the name for his Gatling series. These are books he wrote late in his career with the help of his second wife, Mary Carr—who had previously worked with him on several entries in the Buckskin series as Kit Dalton.

After extensive research, paperback historian Lynn Munroe has established that when Leisure Books killed the Gatling series after six books, McCurtin had already written the manuscripts for books seven and eight. Per Munroe, after a suitable waiting period, McCurtin changed Gatlin’s name to Garrity, repurposed the stories by shifting the emphasis away from the weaponry to feature the protagonist as a traditional hired gun, and sold the manuscripts as a new series—the prose style and plotting, however, clearly marking the books as Gatling adventures. 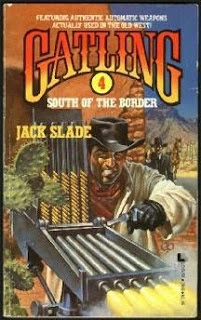 Personally, I was drawn to the Gatling series by the amazing covers featuring Gatling with different cutting edge weaponry from the western period. These covers are exceptionally rendered and several cuts above the slapdash efforts produced for the men’s adventure and western series of the time. Unfortunately, there is no attribution given to the cover artist on the copyright page of the books or elsewhere. The illustrator has signed the cover paintings with the stylized initials CP, but this does little to help establish identity at this late date.

The covers used for the Garrity books (the repurposed Gatling manuscripts), however, are a completely different story. Research, again by Lynn Munroe, shows the cover art was for the two Garrity tales was copied, borrowed, or stolen from two Outlaw Josey Wales novels. 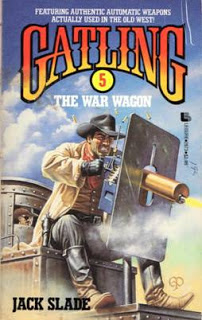 While the Gatling books are straight adventure novels in the tradition of the Fargo series, McCurtin indulges in some tongue-in-cheekness to explain how a man named Gatling works for the Maxim Gun Company—Maxim’s Col. Pritchett tells Gatling the only reason the Gatling Gun Company originally employed Gatling was because they were afraid he might be the illegitimate offspring of their founder.

In his first adventure, Zuni Gold, Gatling is sent to New Mexico—along with a Maxim light machine gun—to help the Zuni people, who are being slaughtered by Jicarilla Apaches working for the evil Copper Trust. An orphan, Gatling was raised by the Zuni and has an obvious motivation for accepting the challenge. 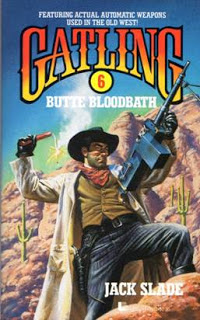 In Outlaw Empire, Gatling takes on Wilson Murrill who, after 30 years in a Louisiana prison, is out to organize crime in the Western U.S. by enlisting the the Sydney Ducks (an Australian gang based in San Francisco), the Italian Black Hand in New Orleans, and every Irish thug and Mexican bandit in California.

Next up, Gatling heads into a Border War delivering weapons to the Metis people in their revolt against the Canadian government. Along the way Gatling meets the real-life figures Louis Riel and Gabriel Dumont. McCurtin was fascinated by the history of the revolt. He does give Border War a new story, but basis it on the same historic events he covered in Sundance: Day Of The Halfbreeds and Lassiter: Gunfight At Ringo Junction.

In Gatling’s fourth adventure, he is sent South Of The Border to Panama. Once there, he is forced to deal with rebel revolutionaries who intercept him while he escorts new automatic weapons to the American expedition building the Panama Canal. 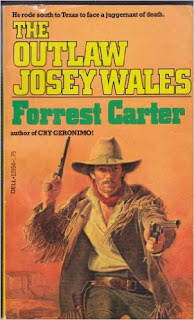 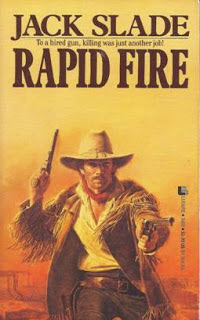 In book five, rebels have hijacked a shipment of rifles and ammunition in Mexico. Taking along The War Wagon—a deadly motorized monstrosity created by Maxim—Gatling is sent to get them back.

In the final official Gatling book, Butte Bloodbath, Gatling ends up in the middle of a fight between Montana mine owners and Michael Patrick Kane, the fanatical Irish-born leader of the Western Labor League. 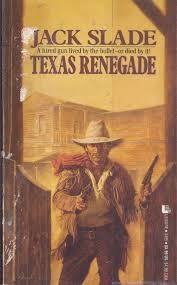 In 1993, Rapid Fire, the first of McCurtin’s repurposed Gatling manuscripts, has the rechristened Garrity reporting to Col. Pritchett of the Maxim Gun Company. In short order, Garrity is sent off to Brazil to retrieve weapons stolen by a hotheaded ex-Confederate General itching to go back to war.

The final Gatling manuscript is repurposed as Texas Renegade, with Garrity in Texas to aid a Scottish cattle rancher being terrorized by the Ku Klux Klan and a group of labor thugs.

As mentioned, I was first drawn to the Gatling series by the intriguing covers, but happily read my way through them enjoying McCurtin’s hard-bitten, straight forward, writing style at its best. These are well worth tracking down—but be forewarned, Gatling #6 Butte Bloodbath is fairly rare and pricey, but with patience a reasonable copy at a reasonable price can be found.