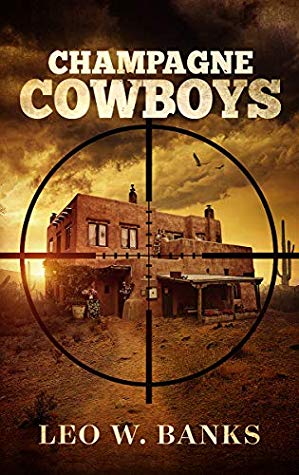 WESTERN NOVELS
CHAMPAGNE COWBOYS
LEO W. BANKS
Back for a second go-round in the contemporary West near Tucson, Arizona, Whip Stark, named Prospero by his Shakespeare professor (and death row inmate) father, is back along with TV reporter Roxanne Santa Cruz, former combat Marine Cash Miller and a host of new misfit characters so clearly realized you’ll know them immediately. That’s the way I felt about streetwise Ozzy Fish and the nervous nun, Sister Phil. Banks has a knack with characters and dialog such that, with a few short sentences, a complete personality emerges.

And make no mistake. This book is a western through and through. You know, I mean, you can’t lift it out of the West. Even Robert B. Parker you could maybe get away with putting Spenser in New York or Philly or somewhere—but these Banks books, they’re West through and through, seen through the eyes of Whip Stark, who’s been there, and done that, thank you.

“Someday a woolly-headed professor of this or that will write a paper about why the Sonoran Desert produces more wanderers than any other landscape in America. Nobody will read it, and the desperate and dispossessed will keep coming.”

Stark manages a trailer park called Double Wide several miles into the desert outside of Tucson. Like most trailer parks, even the most lazy, there’s a lot of drama going on with the people that live there. 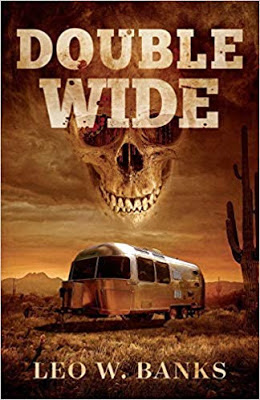 Like Double Wide before it, Banks’ sequel has a lot going on too, but here’s the magic—I never felt lost.

And it is something of a sequel. In addition to the main story, the book expands at least two subplots from the first book, one concerning one of Whip’s tenants, seventeen year old Opal Sanchez, and another concerning Whip’s quest to prove his father innocent of the murder for which he’s been convicted.

The central narrative concerns a series of murders, including the sniper killing of a rich ex-military guy named Ash Sterling. Sterling is the leader of a paramilitary heist gang who call themselves the Champagne Cowboys, and who rob only from the rich. We were talking about a modern Wild Bunch or at least very much the same vibe. Sterling is sort of the William Holden/Pike Bishop character to the wild bunch of the Champagne Cowboys. They’re men unstuck in time and place, and when Sterling is killed, Whip gets pulled into their world.

And Banks is working with some of those same themes we talked about with the Wild Bunch. Remember, he mentions the desperate and dispossessed. I mean, these are characters we run into every day in real life—the people who don’t fit in the preassigned paradigms of our society. Very much like Holden and his men in Wild Bunch. And like with that movie, the desert is a very real presence, the West becomes a character unto itself.

Something about both books that readers should know, especially our friends who enjoy vintage paperbacks—Whip Stark is an avid reader of vintage crime fiction. While reading Champagne Cowboys, I jotted down the character’s recommendation for Chester Hime’s book, The Real Cool Killers, and was reminded to pick up some more Cornell Woolrich. And there’s quite a bit of that sort of verisimilitude—really enjoyable and highly recommended.