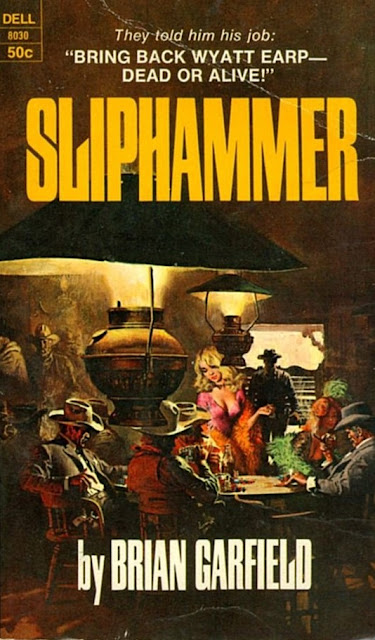 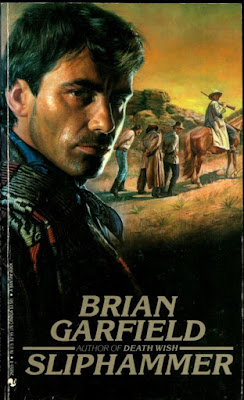 Foolish, Frank gathers a few pals together and does his best to ambush Virgil and Wyatt at a Tucson train station. Get them, before they get you, thinks Frank. Which is about all the thinking Frank has time for before Wyatt cuts him in half with a double-barrel shotgun, and the Earps flee to Colorado. A warrant is issued for the arrest of Wyatt Earp, but immediately put under the Governor’s review. Once the Chief Executive approves, somebody’s gotta serve the papers.

In real life, Pima County sheriff Bob Paul was a friend of the Earps, as was the famed Bat Masterson. Strings were pulled with Colorado Governor Pitkin, and the matter was dropped. 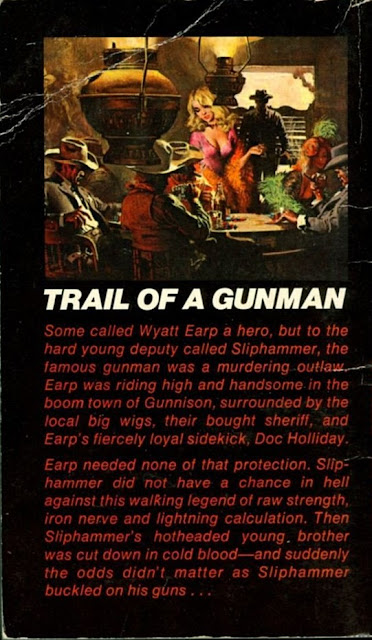 But trusty writer Brian Garfield, known best for his suspense novels Death Wish (1972) and Hopscotch (1975) here picks up the six-shooter where history left it in the dust. In Sliphammer (1970), Garfield’s version of events allows a  Lt. Governor to okay the warrants.

You think you’re having a bad day? Think it couldn’t get any worse than the day Stillwell had? Consider this—Frank had it better than Arizona deputy lawman Jeramiah Tree. At least Frank’s death was quick.

Tree, nicknamed Sliphammer, because of the trick side-iron he carries, is tasked with traveling to the Earp-friendly town of Gunnison and taking Earp into custody. 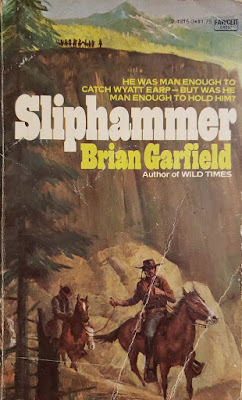 What follows is a sly game of law craft and macho one-upmanship between Earp and Tree, complicated by Tree’s foolish brother, Rafe, lusty sister-in law, Caroline, and a town filled with rambunctious miners.

Earp’s got family complications of his own—whether he admits it or not—with his own wet-behind-the-ears brother Warren and jaded devil-girlfriend Josie, which Garfield uses to good effect. Both men struggle with their inner-demons even as they struggle with each other and the moral consequences of their actions. Garfield gives us a darker version of Wyatt Earp that most novels of the time, but keeps him just this side of despicable.

Because Tree is able to maintain respect for Earp while earning the latter’s admiration is the central struggle that keeps the story moving. Plenty of action, some graphic sex scenes, and a tough-as-shoe leather central character make Sliphammer a top recommendation.