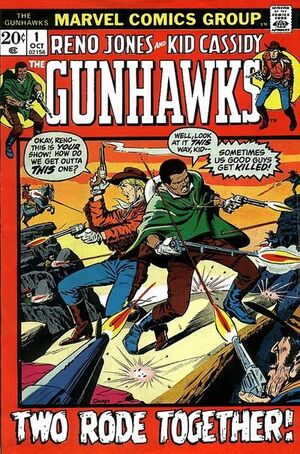 WESTERN COMICS
RENO JONES AND KID CASSIDY
THE GUNHAWKS
In the early 1970s, Marvel Comics editor Roy Thomas was busy taking familiar genres and giving them a contemporary comic book spin. Marvel introduced the Universal Monsters to its lineup, capitalized on the Kung-Fu craze, and touched on motorcycle culture.

With racial awareness high and African-American super heroes like Black Panther and Luke Cage taking center stage in their own comic books, the House of Ideas launched a bold new western title called, The Gunhawks. 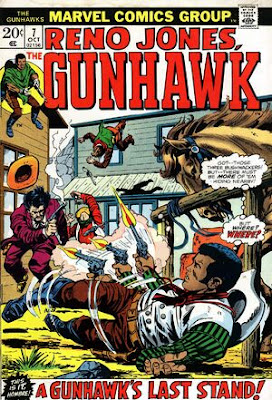 While successful old gunnies like the Two-Gun Kid, Kid Colt, and the Rawhide Kid continued to sell, there’s no denying their four-color stories were formulaic (and often, simply reprinted from the ‘50s).

So, while The Gunhawks harkened back to something old, it was something new—a violent, interacial buddy story set in the old west. Created by Gary Friedrich and Syd Shores, the six-issue series tells the story of Reno Jones, a black child who grows up on an antebellum Georgia plantation. Treated as an equal and tutored with the owner’s son, Reno and the Kid grow up as brothers. When war breaks out between the states, Reno is reluctant to fight for the Confederacy, but eventually must after Union soldiers savage the plantation and carry away his girlfriend, Rachel. When the war ends, the two brothers find each other in the wreckage of the Cassidy plantation. Together, they set out for the West in search of Rachel.

In the first issue, Reno and Cassidy are stopped from killing a buffalo by a wild-eyed old timer who schools them on the proper methods of the hunt. He teaches Reno to use a custom-built .50-caliber buffalo gun, and stands by while the boys fight off a gang of evil poachers. Like so many comics of the time, there’s a message there—but Friedrich doesn’t let it overpower the action. 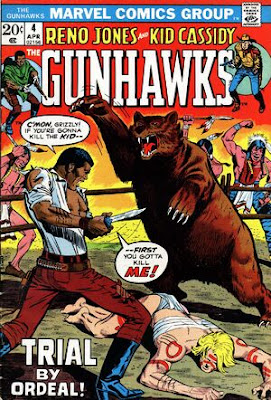 In later issues, the boys find Rachel and rescue her, fight a bear, get captured by Indians, and stand up to a company of Union soldiers. In a bold move, Friedrich kills off Kid Cassidy in issue number 6 and paves the way for the next issue, simply called Reno Jones, Gunhawk. Sadly, issue seven was the last of the series.

All in all, the series is good fun, and if the anachronistic dialog between Reno and the Kid seems too hip, remember that the Gunhawks had its heart, if not always its history, in the right place.