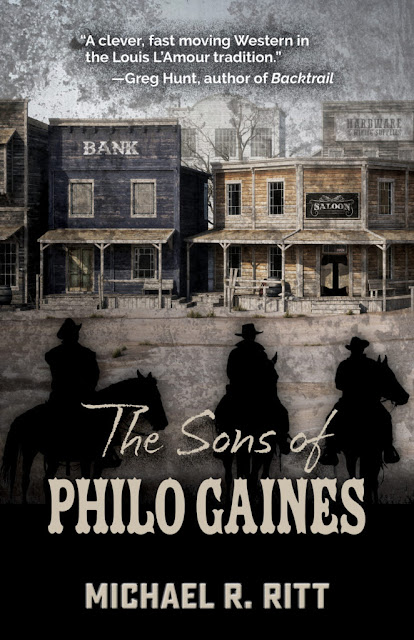 WESTERN NOVELS
THE SONS OF PHILO GAINES
MICHAEL R. RITT
Michael R. Ritt’s novel, The Sons of Philo Gaines (Five Star-Cenage) has been described by western writer Greg Hunt as “a clever, fast moving Western in the Louis L’Amour tradition.” What’s amazing about that line is it’s not only true, but the praise is attached to a first novel.

In the 1840s, Philo Gaines was a mountain man, fur trapper, and Indian fighter—a real rough and tumble man. A big man. Larger than life. The kind of man who casts a long shadow hard to evade, even for three, competent young men in the post-Civil War West. Philo’s sons, Matt (the Scholar), Luke (the Gunman), and David (the Gambler) go about their business on the frontier as anonymously as they can, sometimes using an alias to escape their father’s fame, but the hardy old adventurer’s blood churns in their veins. 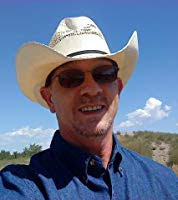 Michael Ritt’s story opens with Princeton graduate, Matt, accepting a teaching position in the wild Texas town of Mustang Flats. What Matt doesn’t know is two of his new friends—siblings Tom and Katie McCutchen—have been targeted by Amos Tolliver, a land-hungry bad man who wants their ranch. It’s a set up that might seem like a typical western trope, but Ritt adds a dark connection to the Gaines family and uses the opening not only to introduce the three brothers, but to give each of them their own action packed adventure. It’s a unique format of three interlinked novellas that keeps the story flowing. When the inevitable reunion occurs, the reader knows these men well enough to feel like a member of the family. You can’t help but root for your folks to win the day.

Fresh, clean writing and a deep sense of place highlight the brothers’ solo stories. No mean feat since the narrative casts a wide net over Texas, the New Mexico territory, and Wyoming. Here, Ritt excels, adding just enough description to root the tales, but not inhibit the action. Especially enjoyable is a Brett Maverick style sub-plot in the Gambler’s tale concerning a feud between David and a town ruffian named Ox.

The wider arc is equally rewarding and satisfying in a historic context. So too, Ritt sneaks in an appearance by old Philo Gaines himself, now a United States senator, a clever cameo that puts just the right punctuation on the book. I’m looking forward to Ritt’s next offering.