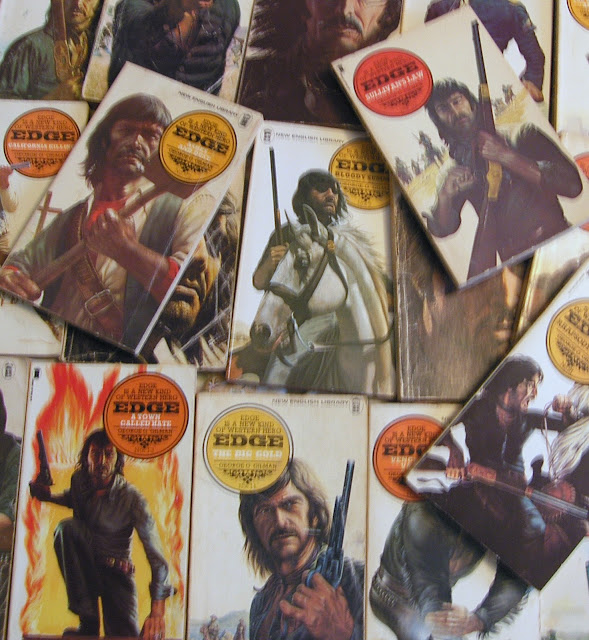 BRIT-WEST
THE PICCADILLY COWBOYS RIDE
The death knell of the Western genre was ringing loudly in the early 1970s, but then as tough a group of Brits as had never been west of the Mississippi, rode out of a dark and dangerous Piccadilly pub in the heart of London. Four deadly UK wordslingers with their battered typewriters tied down, ready to blast out paperbacks filled with violent, brutal, blistering action. They were set for a showdown against every tin star tradition of the western genre and determined to shoot 'em to dollrags. 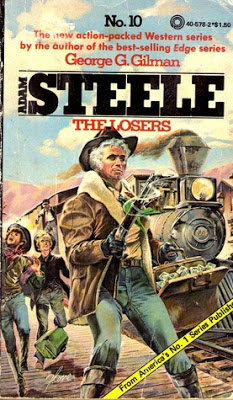 For the next decade, the gang known as The Piccadilly Cowboys carved more than three hundred notches on their combined typewriters one for every hard, fast, ultra-violent tale they produced. Terry Harknett, Angus Wells, Laurence James, and John Harvey had truly never travelled west of London, yet their influence would save the western genre from obscurity. 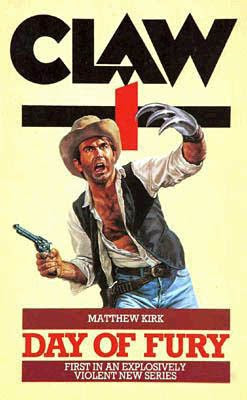 Originally, the first of the Piccadilly Cowboys, Terry Harknett, took his inspiration For his iconic Edge character (by far the most successful and well known of all the Western series associated with the Piccadilly Cowboys) from the shadowy and violent world of Morgan Kane, created by Norwegian bank clerk Kjell Hallbing. Under the pseudonym Louis Masterson, Hallbing depicting Kane as a hard-drinking, hard-living, guilt-ridden Texas Ranger. Beginning with Without Mercy in 1971, Kane galloped through more than 80 way-above-average adventures. The books were a phenomenal success in Hallbing's native Norway. Kane proved to be such a compelling character, he also made regular, shorter appearances in Arnesen's fortnightly Western magazine. At the height of his popularity, there were even Morgan Kane playing cards. 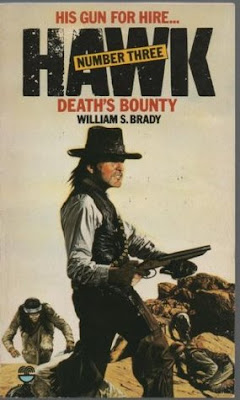 Moving beyond Kane, the protagonists created by the Piccadilly Cowboys were not traditional anti-heroes, or even amoral drifters with their own personal code. They were often brutal, violent bullies sociopathic villains with no thought for anything beyond their own survival or the slaking of their depraved lusts killing, vengeance, sadism, and prurient rutting. An output of over three hundred Westerns, in two dozen or more series featuring these vicious gunmen, cemented the reputation of the Piccadilly Cowboys for creating The Most Violent Westerns In Print...

Edge definitely led the pack, but the Westerns from the blazing typewriters of the Piccadilly Cowboys almost always sold well. Series such as Apache, Jubal Cade, Caleb Thorn, Crow, Breed, Gunslinger, Gringos, Hawk, Hart the Regulator, Peacemaker, Adam Steele, The Undertaker, Herne the Hunter, and Claw all spread their violence and bloodshed across 150 pages of blistering action month after month. 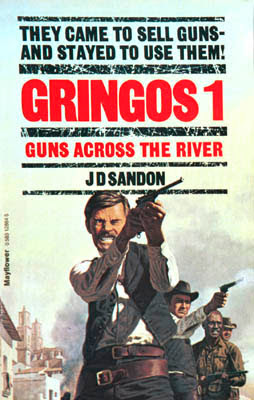 Despite having made the genre relevant again, these new neo-Westerns were not admired by everyone. The old guard of the traditional western white-hatted, horse loving, damsel rescuers reviled these blaggards, who they believed were destroying their legacy. When the frenzied pop-culture infatuation with the Vice Vice West eventually cooled, the custodians of conventional shoot- em-ups celebrated. They were more than glad to let the Piccadilly Cowboys and their dark tales fade into the legends writers speak of with awe around the chuck wagon or campfire.

But, the traditionalists quickly learned they should be careful what they wished for. As the purists began to climb down from their high horses, they were blindsided by a band of modern American wordslingers who began burning up the Western genre. Substituting the raw violence of the Piccadilly Cowboys with raw and raunchy sex of what would become known as Adult Westerns. 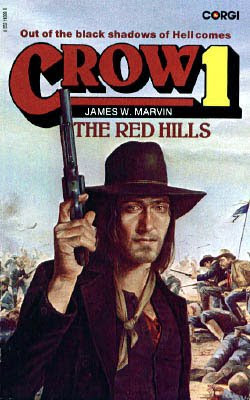 The Western genre survived and eventually benefited from these sub-genres. Over time, however, the output of the Piccadilly Cowboys and the Adult Westerns have quietly been consigned to dusty corners in the darkest recesses of another dying breed used paperback stores.

Today, the Western has matured into a six-guns blazing, style of storytelling combining time-honored themes and plots with the more modern sensibilities of deeper characterization and motivations. However, joining the current crop of traditional American Western wordslingers, is another group of upstart Brits. 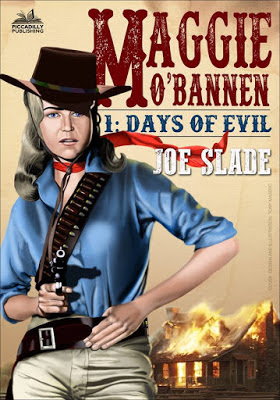 This time, however, they are not blazing the trail of another exploitative Western sub-genre or stirring controversy. British wordslingers such as Jo Walpole (the Maggie O'Bannen series under the pseudonym of Jo Slade, and other Westerns as Terry James), Andrew McBride (six Westerns featuring Calvin Taylor), and Ray Foster (numerous standalone Westerns under the pseudonym Jack Giles) have embraced the genre with a genuine understanding of its current tenets and a healthy respect for the traditions that have gone before.

The Code of the West may be a bit tattered by some different approaches to the genre, but the Western remains alive and well six-guns blazing, bullets flying... 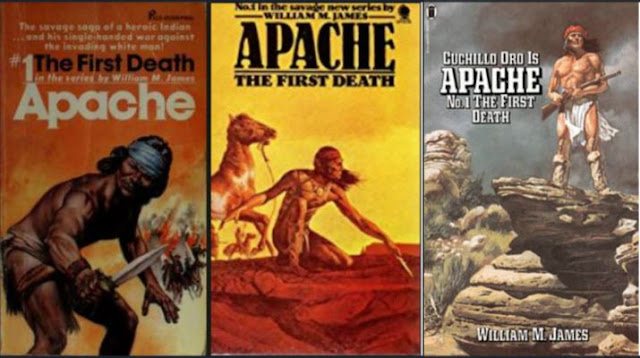 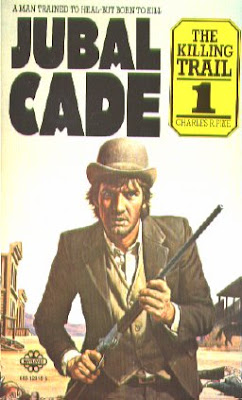 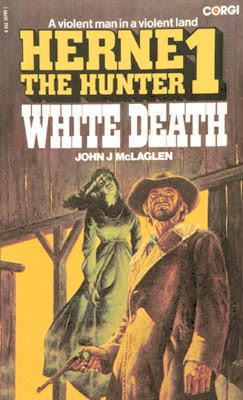 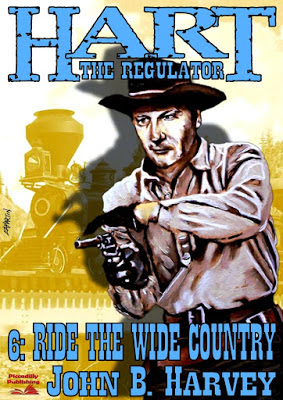 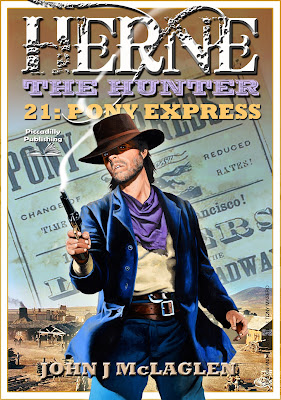 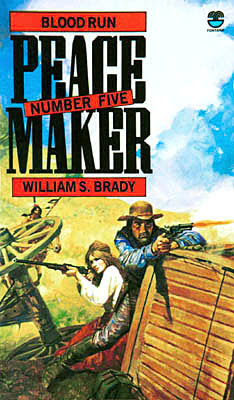 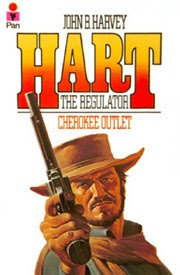 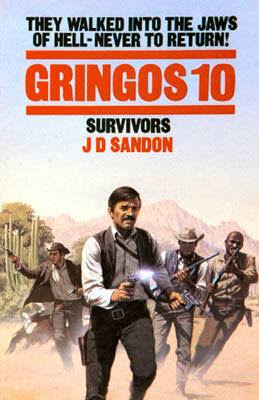 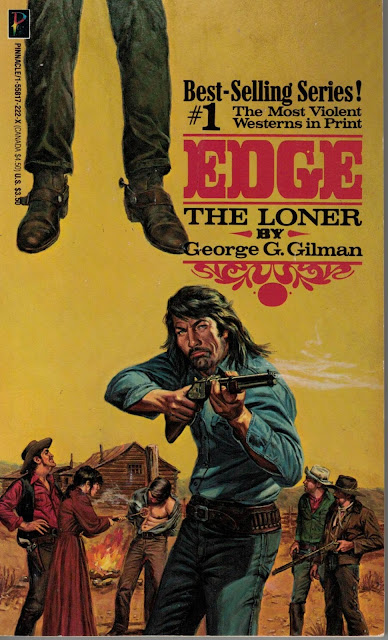