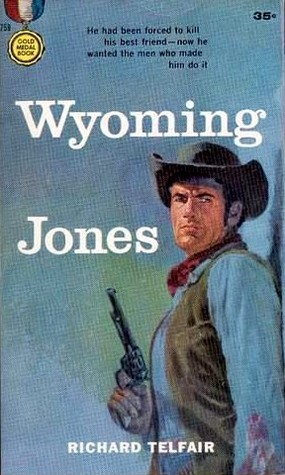 WESTERN NOVELS
THE WYOMING JONES SERIES
RICHARD JESSUP
WRITING AS
RICHARD TELFAIR
There are only a handful of western series characters from the glory days of Fawcett Gold Medal, and one of them was written by Richard Jessup under his Telfair pseudonym. Jessup’s capable of strong, even great writing, and on a sentence by sentence level, he’s masterful. 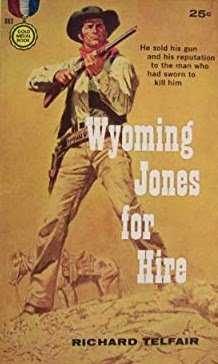 His plots can be a little hit or miss, though, or sometimes a little too simple. The first and the third of the Wyoming Jones books, while hard driving and action packed, don’t have a whole lot under the hood. In the first, Wyoming Jones, we meet the title character and his adoptive father Curly, then follow Jones on a book-length revenge quest after Jones is forced by circumstance to kill Curly. Jones is after the man who put Curly in the position causing Jones to perform a mercy killing. It’s strong stuff, but is a little flimsy to sustain an entire book without additional complications—and apart from Jones tracking the killer from place to place, there aren’t any. Even with some capable writing, it’s just a solid C.

The third book in the series, Wyoming Jones for Hire, starts out strong as Jones wanders onto the range of a territorial cattle baron. After a tense standoff, the two become fast friends—except Jones and the baron’s wife are as drawn to each other as Lancelot and Guinevere. The rest of the novel takes its slow time getting us to the eventual affair and the eventual showdown between the two former friends. Once again, the structure is a little too flimsy to sustain an entire book, even one that’s only 142 pages long, and I give this one, like the first, another solid C. 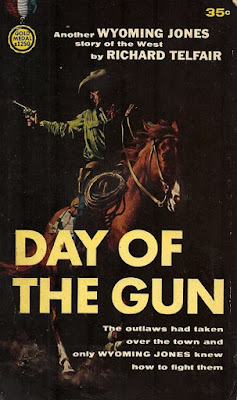 But Day of the Gun, ah, now that’s the standout. Coming in at a B+ or maybe even an A-, it flirts with being a western classic. There are a number of threads in this one and they all deliver the goods. Jones has just resigned as deputy in a town where he was hoping to settle. But a band of confederate heisters has arrive, lying in wait to ambush a shipment from the confederate treasury. Throw in some canny Apaches who’ve been waiting for a chance to take revenge on the town, a scheming gunman who’s after the treasure for himself, and some great secondary characters with plans of their own, and you end up with one page-turning, dynamite western.

If all the Wyoming Jones books had been more like Day of the Gun, the character could have sustained a long series and would undoubtedly still have a loyal fan base.