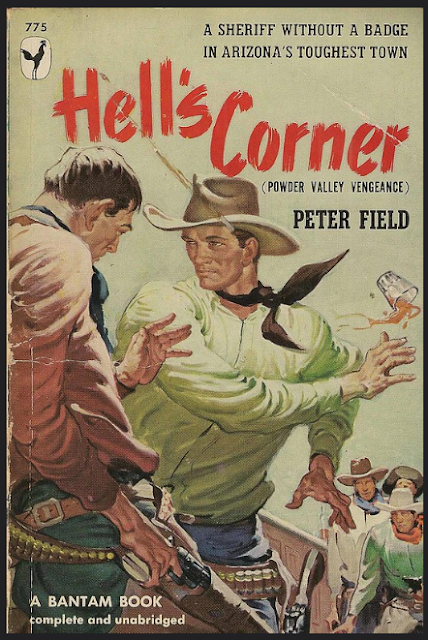 WESTERN PAPERBACKS
HELL’S CORNER
The pseudonym of Peter Field is almost as storied as the fiction released under it. Thayer Hobson,  eventual president of William Morrow and Company and publisher of Erle Stanley Garner and two time western novelist, originated the name for the first Powder Valley Westerns: Outlaws Three (1934) and Dry Gulch Adams (1934). Davis Dresser, who wrote Mike Shayne novels under the pseudonym Brett Halliday, would also write under the William Morrow house name Peter Field, as would Englishman, Fred East (who also wrote westerns as Tom West). 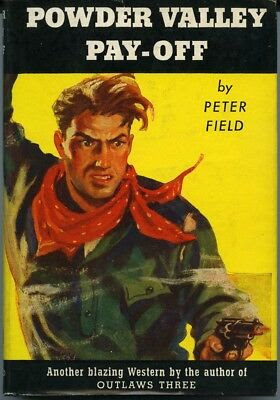 There must be a hundred and some-odd thousand Powder Valley novels by Peter Field starring the two-fisted hero Pat Stevens and his erstwhile sidekicks, Sam and Ezra.  After their William Morrow and Company debuts, many of them got second life as Bantam paperbacks and Dutton Pocket Books.  As recently as 1988, Avon was reissuing select Powder Valley adventures.

When Bantam reprinted Powder Valley Vengeance, they changed the original  title to Hell’s Corner, which might have been a smart move. Not only did they increase prurient interest, but they heightened relevance to the actual story. (The setting is an untamed, unclaimed portion of Arizona called Corpse Corner—but like the Bantam editors, I like Hell’s Corner better.)

It’s my first time with Pat, Sam and Ezra, and I don’t know who actually wrote this entry in the series. At first I was leaning toward Dresser who seems to have written the majority of them, but after reading Ghost Gold by Tom West, I’m not so sure. 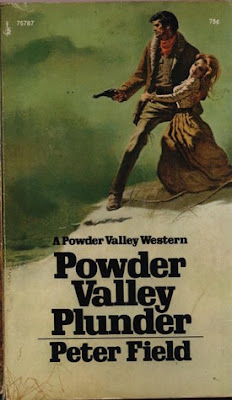 In the first chapter, Field makes reference to Pat’s past adventures with lithe, dark Sam and burly, red-haired, one-eyed Ezra, and the book seems like an immediate sequel to a prior story. Pat has accepted a marshal’s badge in Powder Valley, something his footloose friends don’t approve of. In his raucous portrayal of the trio’s friendship, Field pushes all the right male adolescent buttons: I can imagine really latching on to the series at thirteen—or thirty!

I don’t believe Bantam always changed the Powder Valley titles when repackaging them. While the back page announces the availability of Land Grabber (originally Fight For Powder Valley), it also advertises Trail South From Powder Valley, apparently an original title. Most of the series is readily available in one format or other.

ABE Books easily lists more Powder Valley books than I could read in a year, and I found this one in fair condition, bundled with six additional pulpish paperbacks tucked away at an antique mall in Iowa.