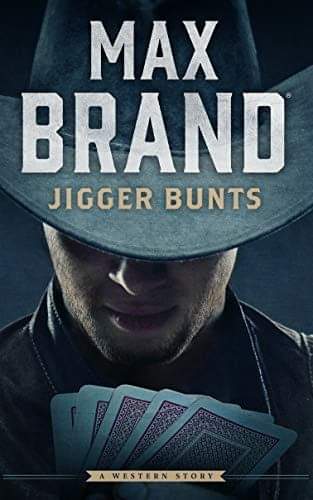 WESTERN NOVELS
JIGGER BUNTS
MAX BRAND/FREDERICK FAUST
The following is a guest review from wordslinger and Six-Gun Justice Deputy Andrew Salmon.
Frederick Faust’s place in the pantheon of great Western yarn spinners is assured and unquestioned. Writing as Max Brand, he earned that reputation by spreading around enough Western material to fill 340 average size books like so many bullets in a Peckinpah gunfight. Legend has it he sold 90% of what he produced.

But what of that 10% which has gone unsold since his death in action during WWII?

Well, Center Point Large Print and Blackstone Books has begun to answer that question recently by publishing some of these ‘lost’ tales. And the first one out of the corral is Jigger Bunts.

Of course with material which has not seen the light of day in eight or nine decades, the question arises why these stories have not been published until now while 100s of Faust’s other stories and novels have scarcely been out of print during this time. In the case of Jigger Bunts, we readers can now answer that question for ourselves. 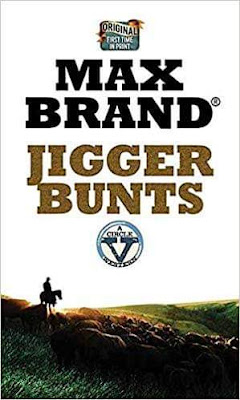 The novel consists of two parts and introduces us to Jigger Bunts who we are told by Tom Reynard, ramrod for the Bar L and narrator, was a wide-eyed eighteen year old from New York come to range cows through the winter months. To pass the long, dark nights, the other hands take to telling tale tales to young Bunts who eats the stuff up and believes it whole hog. The joke is to give to Reynaurd, as ordinary a cowpoke as ever climbed into a saddle, incredible abilities and Herculean accomplishments. Soon Bunts is convinced that no one could out-fight, out-shoot, out-ride or out-anything tough ol’ Reynard. Bunts quickly comes to worship the ground Reynard walks on and wants to emulate the cowhand in every way.

Slightly put out by the unmerited praise, Reynard goes along with the joke because it keeps the peace and keeps the long hours moving. Until he sees a chance to put a stop to it once and for all. When the group is celebrating Reynard’s fighting prowess one night, he is able to step in to relate how he was completely and thoroughly whipped in a fight one time. A picture torn from a magazine provides a face to the fictional name given to the guy who bested him.

Hoping only to climb down off the pedestal the others have placed him on, Reynard’s plan works too well. Bunts is now the stalwart follower of the fictional man from the photo – a ruthless, tough as nails gunfighter named Louis Dalfieri. Immediately he adopts the look and trains to attain the prowess heaped upon the non-existent gunman in the photo while Reynard is instantly reduced to being just the boss once more.

All goes well until Bunts brings a gambler to the ranch who fleeces the men. Well, ruthless gunman Dalfieri wouldn’t stand for that and neither will Bunts who tracks the man down. This results in Bunts, as Dalfieri, becoming the outlaw the others fabricated out of whole cloth. The remainder of the story deals with Reynard trying to stop Bunts before he’s hunted down by the law.

This set up is almost standard Fred Faust fare. The execution of the idea doesn’t quite measure up however. To qualify that last statement, I’ll read anything Faust wrote. If they stumble upon a crumpled up grocery list at the back of his desk drawer, you can put me down for the deluxe slipcover/hardcover printing of it. Thus reading Jigger Bunts, for me, was a labor of love. Frankly I didn’t expect much, given the long decades it lay dormant, and therefore could not be overly disappointed. That said, if this is your first exposure to Faust’s work, you’ll most likely come away with a ‘what’s the fuss over Faust all about’ vibe.

Jigger Bunts fails first from a lack of focus. The novel swings from light-hearted yarning to flat-out comedic buffoonery to deadly serious Faust with a little romance thrown in. It’s trying to be a bit of everything but this Faust of all trades suffers from the pitfalls of such attempts and masters none. Faust referred to his writing as ‘dreaming’ where he put himself into a trance-like state and the words flowed. Much like a dream, Jigger Bunts wanders along and I can’t help feeling Faust wasn’t quite sure where he was going with this one and decided to set the thing down to see where the setting led him. The lack of focus hampers the reading experience.

The other failing in the tale is the narrator’s description of action taking place far away from where he’s is at the time of the tale. We don’t get to see what transpires, we are merely told what happened elsewhere and how significant it was when it happened. That’s a limitation of first-person narration but nowhere is that limitation more evident in Faust’s work than Jigger Bunts. This detachment from events moves the reader even farther from the tale and one’s interest lags.

It’s not all doom and gloom however. This is a Max Brand tale! Well-drawn characters, great pacing and dialogue are hallmarks of his work and they are on display in Jigger Bunts. The female character especially, a well-worn, attractive woman who marries men for their fortunes, strays from the wide-eyed innocence of typical Western damsels. The tale certainly doesn’t read as if it’s from his formative early years. No date is given for the original manuscript so this is guess work on my part but with more than 100 Faust books under my belt, I’ve got a sense of his style and Jigger seems to hail from his just about prime Faust time. That’s my two-cents for what it’s worth.

Should you read Jigger Bunts? Well, if you want a hardcopy for you bookshelf, it currently only exists as a large-print hardcover from Centre Point Large Print. The ebook and audible versions come courtesy of Blackstone Books. Pick your poison. If you’re a Faust fan, you’ll want to give this one a try. If you’re a Faust Fanatic like me, well it’s a no-brainer. For today’s Western fan, it’s not a bad read ultimately. If one comes to Jigger Bunts not expecting a master work from one of the greatest writers of the 20th Century, there’s enough in the tale to entertain. But not enough to ‘wow’ anyone. 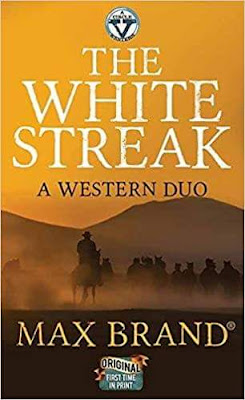 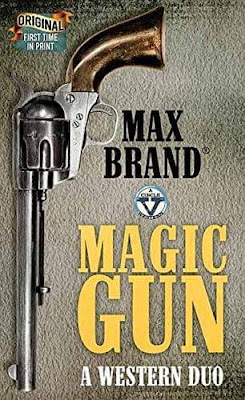 There are future unpublished Faust tales on the horizon though the most recent release raises a few eyebrows. The Magic Gun bears the ‘first time in print’ logo as does Jigger Bunts but Gun has Street and Smith Copyrights from 1929 and 1928 for the two collected tales which appeared in the original pulps: “The Magic Gun” in Western Story Magazine 4/7/28 and “The Danger Lover” from the 7/9/29 issue of that same publication. The publisher is either being very loose with the interpretation of ‘first time in print’ or there is a printing error somewhere.

A future volume, The White Streak, carries the “unpublished” logo but no detailed information about the book is available. There was a Faust tale called “The Streak” which ran in Argosy in 1936 and published by Dodd Mead in 1937. There aren’t any similarities to be seen based on the description of the forthcoming volume so the jury is still out on The White Streak. As the hero is a football player who heads West, it sounds like my kind of tale.

Either way, I’ll be reading these volumes and any future volumes which contain Faust material I haven’t read. Hey, I’m a fan.