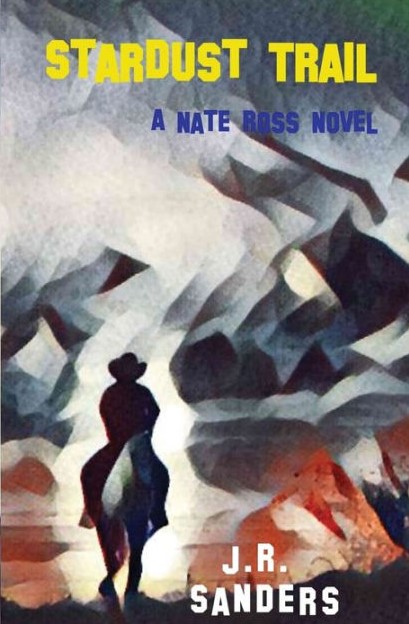 WESTERN NOVELS
STARDUST TRAIL
A NATE ROSS NOVEL
J.R. SANDERS
Note: Although I’ve enjoyed interviewing over 250 authors on LA Talk Radio’s weekly radio show The Writer’s Block—I’ve never written a review. I hope you will find something here that works for you. I’m not an author or writer of any kind, I’m approaching the book as a reader—and I loved this book, in fact, I inhaled it... Bobbi Jean Bell

I have  been a fan of author J.R. Sanders from his first western fiction title, The Littlest Wrangler to his acclaimed tribute to those who sacrificed their lives in the line of duty with little fanfare Some Gave All: Forgotten Old West Lawmen Who Died With Their Boots On. When he announced there was a new book in the works with a story line set in 1938 Hollywood and a cast of characters including a private detective, B western movie actors, Marion Robert Morrison, Max Terhune and Elmer Sneezeweed, Herbert Yates of Republic Pictures as well as locations like Chatsworth’s Iverson Ranch and Vasquez Rocks…well, I was hooked!

This much anticipated book, Stardust Trail is out, and, worth the wait. Told through the eyes of Los Angeles based private investigator, Nate Ross hired by Republic Pictures, we see what he sees, and he describes his world in easy, uncomplicated terms yet with details that transport us right into his world. Nate Ross tells us what he prefers and what he thinks—we learn he likes pastrami and Pickwick Ale, he’s a skilled eavesdropper, he doesn’t like stakeout work or camping or hiking, he faces trouble head on, and he’s a deft investigator. He has a knack for getting folks to trust him and he does not betray that trust. I fell in love with Nate Ross from page one and am delighted to learn more books will follow.

J.R. Sanders, through Nate Ross, spins us a story with 1938 household names—Gene Autry, Roy Rogers, Yakima Canutt—some are important to the storyline like Nate’s high school friend Duke Morrison (later known as John Wayne) and others help set the time frame. His descriptions of locations are spot on, one of my favorite passages is the mule ride Nate and Dusty take through Vasquez Rocks—if you’ve never been there—J.R. nails it.

Director of Author Events—Rendezvous With A Writer Out West—Where Readers & Writers Meet...https://www.outwestshop.com/
By Sixgun Justice at May 24, 2020