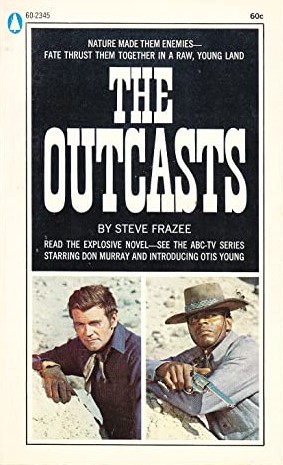 TV WESTERNS
THE OUTCASTS
Jemal David and Earl Corey. One black, one white; one an ex-Union soldier, one an ex-Confederate officer; one an ex-slave, one an ex-slave owner. Together, they are the Outcasts...Thus began a somewhat controversial post-Civil War Western following the contentious relationship between bounty hunter Earl Corey (Don Murray) and ex- slave Jemal David (Otis Young). The two men despised each other, but they are forced to stay and work together for survival in the hostile, cold, brutal, and unforgiving environment in which they find themselves. 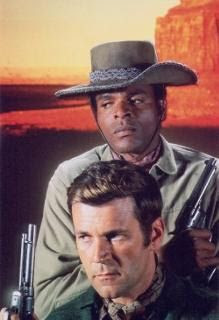 Earl Corey is hair-trigger tense, having been forced into this new Western paradigm. He resents everything and everyone. Jemal David, however, is comfortable with his new life as a free man. Thing are still tough, but they will never be as tough as his past. As the two are forced to travel together a grudging respect develops and their relationship evolves from contempt to tolerance to cautious trust. Eventually, when asked about Jemal, Corey loosens up enough to reply, “We ride together.”

In 1968, Don Murray was an established movie star, earning an Academy Award nomination as Best Supporting Actor for his debut role in Bus Stop opposite Marilyn Munroe. Unlike today, in the ‘60s moving from film to TV was considered a career killer. However, Murray felt the role of Earl Corey had the emotional weight he was looking for in a lead role. The Outcasts only lasted one season, but despite being unable to reestablish himself on the big screen, Murray went on to an extensive career in made-for-TV movies.

Raymond St Jacques had broken the TV Western color barrier in 1965 co-starring on the final season of Rawhide. It took three years before Otis Young (who was an unknown at the time) became the second African-American actor to co-star in a TV Western. Young’s biggest role after The Outcasts was in The Last Detail playing opposite Jack Nicholson. He later became an ordained minister and theater teacher at Monroe Community College in Rochester, New York. 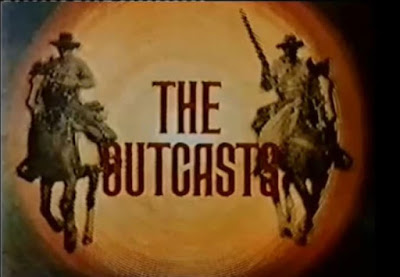 The up-front racial component of The Outcasts appealed to both actors. Murray though the premise was socially important, and Young was gratified as, “For the first time in American television they didn’t deny that when a black man went into Western towns he was going to run into trouble.”

With its Spaghetti Western vibe and candid depiction of the unapologetic racism of the era, The Outcasts was unlike any other TV Western of its era. The depiction of the post-bellum West was an obvious metaphor reflecting the racial inequities of the 1960s. The series, however, was neither preachy or a mismatched partners comedy. It was much more The Defiant Ones played out across a Western landscape. 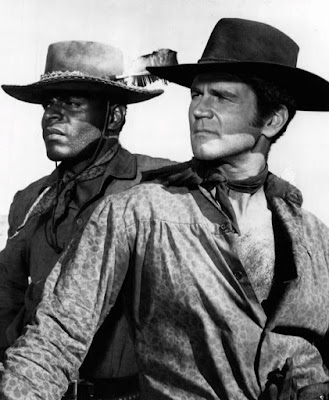 In 1973, Murray and Young reunited for a film adaptation of the play Call Me By My Rightful Name, which was about a white man and a black man in love with the same woman. Murray produced the film and convinced his former partner from The Outcasts to play opposite him again. The two remained good friends until Young’s death in 2001 at age 69.

After recently binge watching the series, I remain impress with the concept of the show. Its complex agenda faced an uphill battle against prevailing social attitudes in a time when the term woke was a long way from becoming part of the public lexicon. The show’s cutting against the grain of the traditional western also made network executives nervous. These were both factors which more than contributed to the show’s cancellation after one season.

For my part, I believe the intentions of the show were genuine, and despite the fickle filter of network television censors (who approved the show for airing then gutted the scripts of any social value), it achieved some limited success by publicly acknowledging there was more than one side to racial tensions. Your mileage may vary from mine, however, as known curmudgeon Harlan Ellison excoriated the show in his review for The Los Angeles Free Press, claiming the writers and producers were so out of touch they were incapable of portraying black people as they really were.
By Sixgun Justice at May 13, 2020

Email ThisBlogThis!Share to TwitterShare to FacebookShare to Pinterest
Labels: THE OUTCASTS, TV WESTERNS