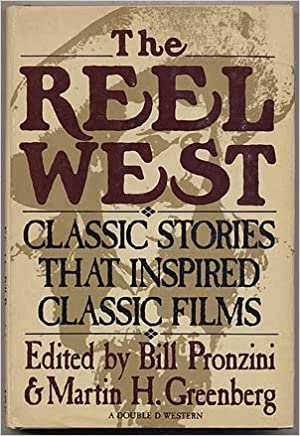 The Reel West is a two volume set from the mid-80s edited by the ubiquitous and ever-talented duo of Bill Pronzini and Martin H. Greenberg. I don’t even have a good guesstimate of how many story collections Greenberg put together in his lifetime—in a host of genres, and usually with top name collaborators like Isaac Asimov, Charles Waugh, and of course, Pronzini.

The Reel in The Reel West is a play on words and features the original western short stories that inspired classic western films. As a fan of both—short story and film—this was a no brainer for me and long ago, I made sure I had both hardback editions on my shelf.

Volume One includes some of the usual suspects: The Man Who Shot Liberty Valance by Dorothy M. Johnson, Three-Ten to Yuma by Elmore Leonard, The Tin Star by John M. Cunningham—which was the basis for High Noon. There’s a rarity or two like Tennessee’s Partner by Bret Harte from 1869. That one was the basis for a 1955 RKO release starring John Payne, Ronald Reagan and Rhonda Fleming, but interestingly—The Harte story has also been filmed as
Tennessee's Pardner (1916), The Flaming Forties (1924), and The Golden Princess (1925)

The Second Reel West is more intriguing to me with a total of ten stories (two more than volume one) In this one, we get to read the original tales behind such iconic films as She Wore a Yellow Ribbon, A Man Called Horse, and The Tall T—but also some corkers like The Singing Sands by my old buddy Steve Frazee which was made into Gold of the Seven Saints and Sergeant Houck by Jack Schaefer (famous for Shane), the basis for Trooper Hook.

Both books are worth the price of admission, and readily available online so you won’t have to line up at the ticket counter.