WESTERN NOVELS—HOW THE WEST WAS WON 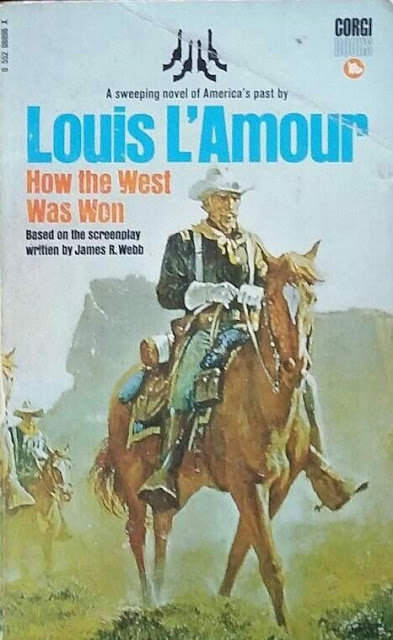 WESTERN NOVELS
HOW THE WEST WAS WON
LOUIS L’AMOUR

While it is often billed as a novel by Louis L'Amour, the designation is purposely misleading. In reality, How The West Was Won was originally conceived as a series of Life magazine articles published in 1959. Those articles consisted of photos and allegedly true vignettes pertaining to the expansion and settling of the wild west.

The articles would eventually provide the basis for James R. Webb's screenplay for How The West Was Won. The movie, released in Europe in 1962 and on domestic screens in 1963, was the last of the big screen epic Westerns. Sprawling, multi-generational, and star-studded, the movie was lavishly filmed using the three-strip Cinerama process. Although the picture quality when projected onto curved screens in theaters was stunning, attempts to convert the movie to a smaller screen suffer from the technical shortcomings of the process (in Letterbox, the actor's features are grossly distorted). Despite this technical issue, the film enthralled audiences and snagged three Academy Awards, including Best Screenplay.

The film's producers believed they had a potential hit from the beginning . They wanted a novelization of the script commissioned as a promotional tie-in to raise the public awareness of the film.  This desire would lead to L'Amour's opportunity to novelize the story—something he had never done before nor would ever do again.* At the time, L'Amour was frustrated with the restrictions being put on him by his publisher. They didn't want to change the successful formula of his traditional paperback Westerns. L'Amour wanted to grow creatively  by writing longer, more complex stories, but the publishers stubbornly pushed back.

With his son Beau about to be born, L'Amour needed to move out of the adults only apartment where he and his wife were living. Cash was needed, so when his publisher offered him a contract to write the novelization of How The West Was Won, L'Amour saw it as both a financial windfall and an opportunity to expand on what he considered a mundane and lackluster script. He also thought he could do it fast.

However, How The West Was Won became a millstone around L'Amour's neck. His obsession with portraying the West as it really was came into direct conflict with Hollywood's version of the West as portrayed in the screenplay. There were action scenes (a wagon train trying to outrun marauding Indians while leaden down with a literal tin of supplies and goods), L'Amour saw as ridiculous. Others he knew were physically impossible (crawling from the couplings between train cars to the rails below). And there were relationship connections between western characters that did not and could not exist (mountain men did not live in respectful harmony with most Indian tribes).

As L'Amour wrote his way around these problems, he was forced time and again to prove his version of the facts to the movie's producers, who frankly didn't care. There were also constant requests for rewrites as the script changed on the fly while filming was underway. L'Amour's irritation with the project grew exponentially with each clash. However, despite its rocky gestation, L'Amour's version of How The West Was Won would become one of the bestselling novelizations of all time.

The main reason for this was not necessarily because of the rabid love the public developed for the film, but because while L'Amour's efforts remain technically a novelization, the final publication was also much more.

L'Amour succeed against the odds in taking the episodic, uneven, nature of the film and expanded upon every scene (especially in the later chapters of the novelization), imbuing the final product with an epic reality going far beyond the realm of the typical novelization.

Twice as long as any of his previous works, L'Amour's version of How The West Was Won is a true a hybrid—part novelization, part original novel—with a depth of character and story that would easily make the uninformed believe  the novelization was actually the source material for the film instead of the other way around. Still in print today and continuing to sell steadily, the success and popularity of the novel version of How The West Was Won has long outlived its celluloid genesis.

*While How The West Was Won is L'Amour's only credited novelization, a number of his novels are novelizations of screenplays inspired by his own short stories and film treatments. Hondo is the most (in)famous but Beau L'Amour, in his afterword to the Lost Treasures edition of Kid Rodelo, cites that novel & several others as examples.

Email ThisBlogThis!Share to TwitterShare to FacebookShare to Pinterest
Labels: HOW THE WEST WAS WON, LOUIS L'AMOUR, WESTERN NOVELS