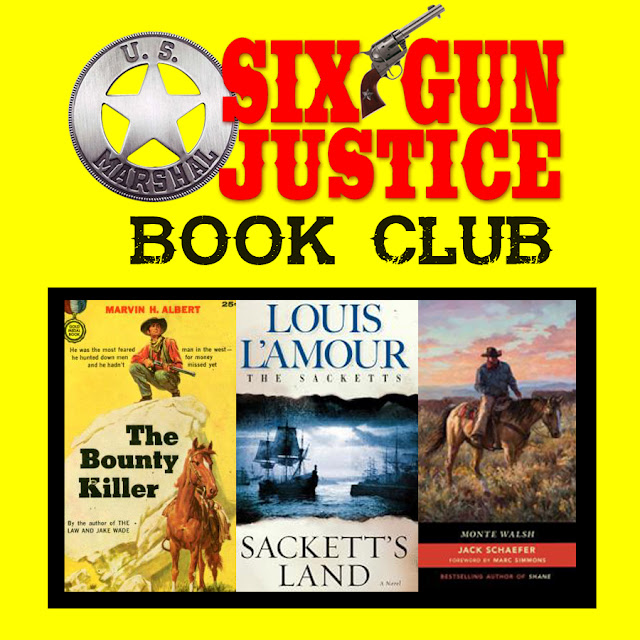 SIX-GUN JUSTICE PODCAST
BOOK CLUB
Howdy, folks...It’s time for the debut of the Six-Gun Justice Podcast Book Club. There is no obligation or difficult literary questions to answer here, just an opportunity to enjoy reading some classic westerns and sharing our enjoyment in a once a month virtual book club meeting.

My Six-Gun Justice Podcast co-host, Richard Prosch, and I are looking forward to interacting with you and talking about June’s book choices, Monte Walsh by Jack Schaefer and Sackett’s Land by Louis L’Amour.

Written over a 10-year period, Monte Walsh is sometimes described as a collection of short stories—each a snapshot of Monte Walsh’s life as a cowboy. In reality, however, author Jack Schaefer—acclaimed for his novel Shane—brilliantly entwines the loosely connected chapters into a richly rewarding reading experience that is far more than the sum of its separate parts.

Monte Walsh has been described as an unheralded American classic—the kind of book you carry in your backpack to read again and again and to pass on to your heirs. Men have named their sons Monte and Chet (the main characters) after reading it, and in some families, Christmas Eve at the Slash—Y, a superb episode from the middle of the book, is read aloud to children during the holidays.

At its heart, Monte Walsh is a masterclass on living your life by a certain code and the pleasure to be found in work. It is the definitive depiction of male friendship exemplified in the interactions between the Monte and Chet and the other men working for the Slash—Y brand.

The book is deliberately paced reflecting the rhythm of the cowboy life. As a result, some readers may find the novel a tad leisurely until they find they have been inexorably drawn into the lives of the characters. Beautifully written, carefully researched, and expertly portrayed, Monte Walsh is a character study of deep resonance and significance.

The plan for our second book choice of each month is to dive into Louis L’Amour’s beloved Sackett clan as they take on all the challenges of the American frontier. L’Amour’s acclaimed family saga begins with Sackett’s Land. This was not the first Sackett book, to be written (that distinction belongs to the Daybreakers), but it is the first book chronologically in the saga.

Hunt one Sackett and you hunt ’em all, is the decree the fiercely loyal and notoriously ferocious Sacketts live and breath. Standing at the forefront of Louis L’Amour’s sprawling canon of the American West, the Sackett stories involve multiple generations of hard men and brave women who never have no back-up in ‘em.

Sackett’s Land begins in England when Barnabas Sackett discovers six gold Roman coins buried in the mud of the Devil’s Dyke. Before he can make full use of them, he is kidnapped and thrown into the hold of a pirate ship on the orders of his powerful enemy Rupert Genester, the nephew of an earl. But Genester is soon to be the first to learn no Sackett can ever be counted out...

Rich and I hope you will enjoy reading either or both of these fantastic novels and will join us at the end of the month to discuss your thoughts with us about the characters and their stories. If you do not have time to read either book, or they are not to your taste, please still join us in our virtual book club meeting for the comraderie and to tell us what your favorite westerns are to read.

To join, please click the below link which will take you to the Bookclubz hosting platform where our Six-Gun Justice Podcast Book Club is hosted...