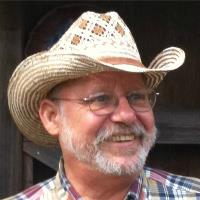 A SIX-GUN JUSTICE INTERVIEW
WITH WESTERN WORDSLINGER
JOHN ROSE PUTNAM
SIX GUN JUSTICE: The bio on your web site says you came west to attend college in Berkeley and ended up settling down in California. Did you always have a hankering to go west? And did you want to write about it?

JOHN ROSE PUTNAM: Actually I came west in the Summer of Love. My journey was motivated more by other things though. I'd gotten into college a few years earlier. Over Thanksgiving of my first term my Dad died suddenly. My money was cut off. I spent almost three years studying and working part time. I hit a wall. My life had broken apart in many pieces. I had a lot to put back together. It took a long time. I came west with two friends in a Volkswagen bug. In Berkeley things began to work for me again. 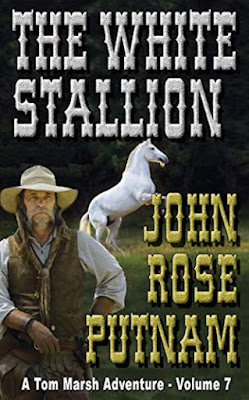 My Dad used to read to me when I was very young. Soon I could read for myself. We lived in a small town. I would go by the county library regularly. I read so much that books would be waiting for me when I showed up, mostly classics, the kind of stories boys like. I read them all. Then, just before high school, we moved. There was only the school library now. I had to struggle to get the assigned books and they weren't what I liked. I had the same problems in college, so when I got into UC Berkeley I took music.

I was great at writing short pieces of counterpoint and for the first time in my life I was exposed to intensely creative people. It was eye opening, but I couldn't make a living at it. I worked for a while at a job that gave me a lot of independence and lived near a book store that had bins of best selling used trade paperbacks on sale out front for cheap.

It's stuns me how many of those I read. Yet through the struggles, and all the years that I'd tried to discover who I am, no one, not even poor little old me, had suggested I write books. Then I got a computer. And I started writing.

SIX GUN JUSTICE: You have more than a dozen works of fiction at Amazon, and a lot of the Western titles are series pieces. Which ones are your favorites to write?

JOHN ROSE PUTNAM: Whatever book I'm working on is my favorite. That's a feature of creativity. One gets totally immersed in the project. I live through my characters. I dream about them. Each book is special. It comes from something inside me that needs to get out into the clean air and sunshine.

SIX GUN JUSTICE: I was especially intrigued by your Roy Martin mysteries — which fall into the western noir genre. What can you tell us about them? 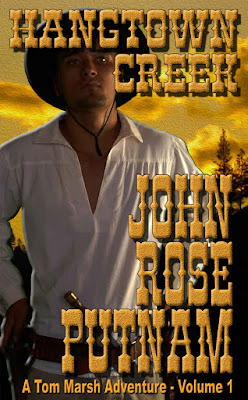 JOHN ROSE PUTNAM: These three books are special to me. They go back to the happy times of my childhood.

The Misplaced Mob starts at a swimming hole where I learned to swim as a young boy. My dad simply threw me in. I made it out alive and loved it. The tree covered in Spanish moss actually sat in front of our cabin by a local lake. As kids, my cousins and I would know when we saw all that shimmering moss that we had arrived. It was an exciting feeling. The cabin and the lake were special to us. The one lane bridge where the book ended led to the cabin. My dad would stop in the middle of it in his '51 Chevy pickup every time he crossed it and stare down at an island just in front of our property.

That island played a big role in "The River of Corn." It was the site of the Temple of Talemeco visited by Hernando de Soto in 1540. All the other places mentioned in his accounts are under the lake that filled during World War Two. I got the locations from my oldest cousin who hunted arrowheads there as a boy. These Indians were a part of a huge Empire the Spanish were looking for and that likely extended across the states of Virginia and North and South Carolina, but could have stretched as far west as the Mississippi River. The Indians were Dakota Sioux. Yeah, they live out west now, you say. You're right. most of them do.

I was a very small boy when we visited a woman who lived in a beautiful log cabin not far from the road to the lake. Everything inside had been handmade, from the oak furniture to the hooked rugs on the floor, everything except the kerosene lamps sitting on crocheted doilies. Like our cabin, which sat along a lake built for rural electrification, this house had no electricity. It became the model for the house in "Shooting the Bull." I saw a lot of bulls while hunting with my Dad. They scared me silly. And along the way to the cabin we rode through a place called Waterloo, an old water and coal stop for the railroad whose tracks ran right beside the road. There was an abandoned Victorian house there that was covered in vines. To a boy at the age I was then, it had to be haunted. That was the house that wound up in "The Stink on Raccoon Creek."

And then I was born in the small county hospital where they took Mrs. Walden after she was attacked later in that same story. All the roads Roy Martin traveled on were real as were the places he went. Only the names were changed and maybe a detail or two here and there. Roy Martin was my great uncle. I went back there in 2002 and visited him. He was 96 and still going strong. I hope I have some of those genes. His house was behind my grandparents, who lived next to me. My grandmother was absolutely special. Her name was Lillie. I changed it to Lily in the books to protect the innocent, and maybe thank her for all she gave to us kids.

SIX GUN JUSTICE: Besides fiction, you’ve written a great deal about the California gold rush. Does that era inform your novels? 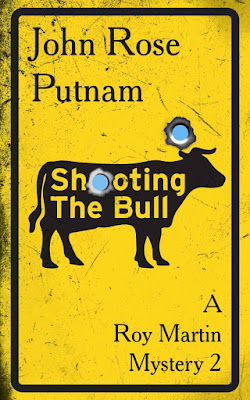 JOHN ROSE PUTNAM: I started writing blog posts about the California gold rush. I'd asked folks about the gold rush ever since I got here. I didn't feel like Californians really knew much about their history. Then I came across material online, an old history of the gold rush. I put it out on my web site, mygoldruhtales.com, in short, easy to digest pieces. People liked it. That led to "Hangtown Creek," my first novel. I was on the way.

There will soon be seven gold rush books, the seventh came out this month. The west started in California. The classic bar scene with women was common in San Francisco early in the gold rush. Wells Fargo was a California bank. Read "Hang Billy Mulligan." It takes place around 1855, only about 6 years after the gold rush started, and tells of a totally corrupt city run by criminals who were elected by stuffed ballot boxes and gangs of men who went from polling place to polling place voting in each. Yep, it was a wild town in those days.

SIX GUN JUSTICE: Who are some of your favorite Western writers, past and present?

JOHN ROSE PUTNAM: I'm very fond of Elmore Leonard, some of his early westerns are remarkably imaginative. Larry McMurtry was a big influence in my Pecos Quinn series since it happens over some of the same turf, plus he had a strong pull on those who don't usually follow the genre. I'm always fond of Louis L’Amour and read most of his books. Zane Grey got things started off pretty well and, for the story I'm working on now, "A Thunder on the Plains," I owe a big tip of my hat to him for the idea. It's the third of the Pecos Quinn series and Pecos and his son Andy go into Comanche country during the great buffalo slaughter to rescue Doctor Burns who stayed behind to tend to the Comanche in book two, "Comanche Hunter."

SIX GUN JUSTICE: What’s next for you in the coming year?

JOHN ROSE PUTNAM: As I mentioned earlier, my seventh book in the Tom Marsh Adventure series just landed. "The White Stallion" is an exciting chase story where Tom takes off after a religious group he suspected of kidnapping another couples baby. His wife, Lacey, in spite of the gunshot wound she took early in the story, had to go along. They lost a lot of time when Lacey's wound festered but Tom was determined that she live and it results in a powerful, but very unconventional, love scene. Then they arrive at the great valley of California and see a herd of wild horses led by the white stallion. Just what Tom needs to start the horse ranch he's always wanted. But can he get the horses and still rescue the baby? It's a love story with a lot of action. Then I'm about three quarters done with "A Thunder on the Plains." Hopefully it will be published soon. This one is truly action packed. And, oddly enough, it has a little romance in it as well.

SIX GUN JUSTICE: Thanks for visiting with us, John.

JOHN ROSE PUTNAM: And let me thank you, Richard, for this opportunity. I am truly grateful. I wish you all the best.
By Sixgun Justice at June 21, 2020