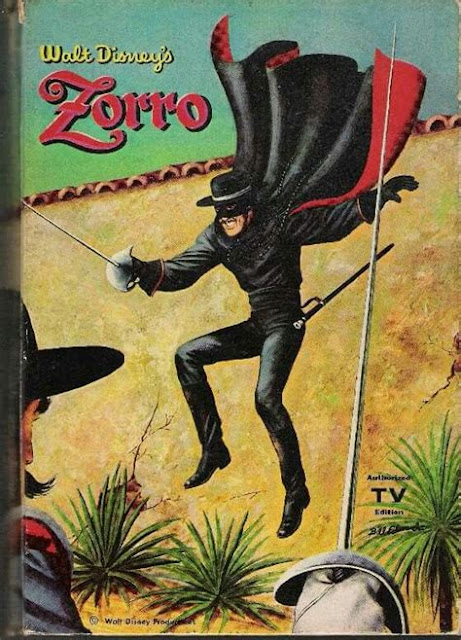 We talk about the Whitman TV tie-in books a lot on the Six-Gun Justice Podcast and the reason is—though they were written for kids—they’re generally well written by noted professionals who were working in the western genre at the time. Walt Disney’s Zorro is no exception, and in fact might be the single best adaptation of them all. 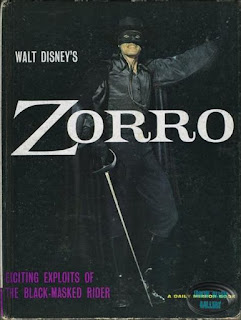 There’s an argument to be made, by the way, that takes umbrage with Disney slapping his name on characters and creations that he merely licensed. After all, if anybody’s name should be applied with a possessive it’s Johnston McCully. This isn’t Walt Disney’s Zorro any more.

Imagine being a kid in the 50s, watching Guy Williams and his cohorts on TV, then picking up the Whitman book to find Don Diego, his mute sidekick Bernardo, the corrupt Monastario, the laughable Garcia, along with a storyline about Don Nacho Torres—transplanted directly from the screen. I would’ve been thrilled.

Especially, in those early days of TV when there was no way to immediately catch a show you might miss in the original airing, landing this book would be a real treat. Whitman released its Zorro tie-in in 1958, so if you missed the resolution of the first arc, you could find out what happened here. I just imagine this bunch of 10 year-old wise-acres running around full of spoilers. 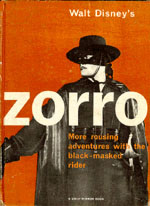 The British edition again presents us with a bit of a mystery in that there were two copies with two different covers. The first release in 1959, has Arthur Groom adapting the story by Steve Frazee. That appears to be a straight forward adaption of the American book. The second, from 1960 features stories by B. F. Deakin and is more of an enigma.

For a complete rundown on all the other Zorro ephemera out there, you can’t do any better than billcotter.com.